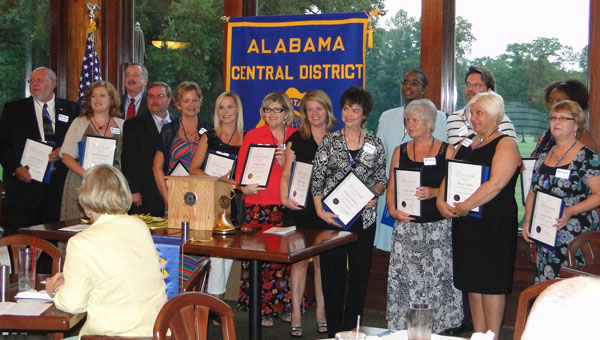 Civitan Club members better their community by meeting human needs when they arise — collecting food, building wheelchair ramps and playground equipment for children with disabilities, cleaning up the environment and other service projects.

The ACTION Civitan Club in Birmingham began holding meetings at the Hampton Inn in March to form a club in Calera.

Merrily Serota, field director of new club growth, said finding the right day of the week and time was difficult.

“People who join an organization such as Civitan are usually committed to other groups who serve the community, so it’s hard to find a time to meet that doesn’t overlap existing meetings,” Serota said. “Our goal was to find 20 people who wanted to perform hands-on projects to help the Calera community, but by the charter date we had 32.”

Civitan Clubs around the area were represented. Many sent monetary donations to help grow the newly formed club. Numerous letters of support from Civitan members were read from the podium. Kearney “Dee” Hutsler, ACTION Civitan Club member and Alabama Central District distinguished governor, was master of ceremonies. Region One Director Ed Higdon initiated charter members. Louis Stephens, vice president of membership-leadership, installed the officers who will lead the club in its initial year of service to the community.

“Each of you are expected to originate and execute the plan governing the conduct of this club,” Stephens charged them. “Serving as an officer is a learning opportunity. Each of you will become better leaders through your position.”

The club completed four service projects prior to chartering.

Mollie Brown can be reached at dmjhb1@bellsouth.net.