Getting to know our students

Hunting for buried treasure in Helena 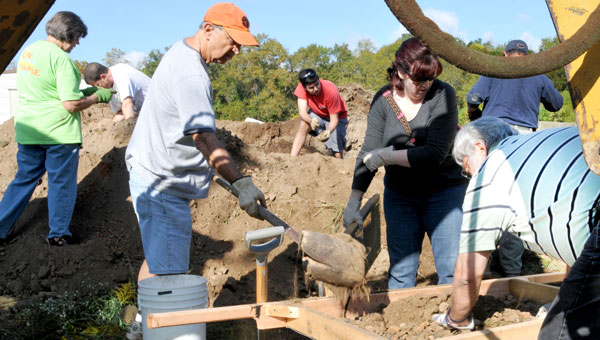 Several enthusiastic local volunteers joined Ken Penhale and Brian Wallis to sift through a large mound of earth that was removed from the current Helena High School construction site.

This soil came from near the Eureka No. 4 mine where the miners’ homes would have once stood.

“First,” said Wallis, who was in charge of the effort, “we’re turning the soil over by bulldozer, as it has compacted since being transported. Too bad this soil is so contaminated.”

By contamination he referred to roots of the kudzu vine, which crept over the mining community hillside in the intervening years since the mine closed around 1925.

“No telling what we are going to find here,” Wallis added.

“Why am I here? Because I needed some peace and quiet after driving my morning school bus run,” joked Julie Franklin. “I wanted to see what might be out here.”

Amanda Gaskin said she and her four children often scavenge off-road paths. They have found an extract bottle from 1915, old liquor and coke bottles.

“I am fascinated with the pieces of history that we just walk over and never notice.”

Found in the Oct. 15 dig were shards of glass, pottery, bottles, bricks and metal.

These will be taken back to the museum and cleaned.

The lower floor of the museum is progressing toward being usable with fresh paint and new displays.

Nunnelly, who was born and raised in Helena, is a U.S. Navy Korean War veteran and boyhood friend of Joe Tucker, for whom the local park is named.

One of Nunnelly’s photos shows him with Joe Tucker in 1947, nattily dressed and posing by the railroad tracks. Joe Tucker (b. 1928 – d. 1971) was a member of the city council when he died of a brain hemorrhage.

Laura Brookhart can be reached by email at labro16@yahoo.com.