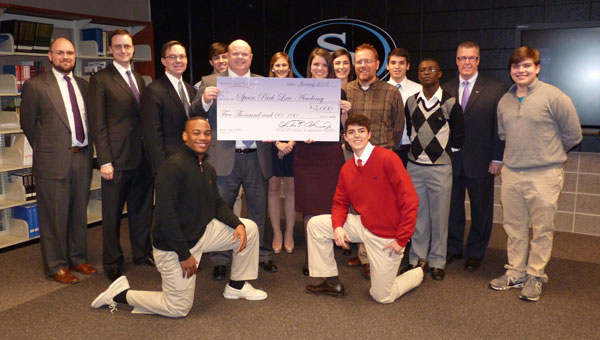 Lawyers from Adams and Reese presented a check for $5,000 to members of Spain Park High School’s mock trial team to help pay for the expenses of traveling to the national competition in May. (Photo/Amy Jones)

The extended stay in New York depleted the mock trial program’s budget, leaving them staring at the responsibility of raising $9,000 to travel to the National High School Mock Trial Championship in Indianapolis in May 2013.

Officials at Birmingham-area law firm Adams and Reese LLP saw the story and decided to help out their younger compatriots.

“We’re always looking for ways to give back to the community,” said Adams and Reese partner Stephen Walsh.

On Jan. 23, several lawyers from Adams and Reese presented a check for $5,000 to the Spain Park Law Academy to help with the expenses of attending the national competition.

Libby Day, one of the mock trial team directors, said the donation will enable members of the team to book airfare and hotel rooms.

“This is the single largest donation we have ever received, and we are grateful to Adams and Reese for the generous contribution,” Day said in a statement. “Our trips are primarily funded by our students and fundraisers that we have year-round, so this contribution makes a huge difference of lowering our students’ costs by hundreds of dollars.”

After the team returned from their extended trip to New York, team members had only a week to prepare for the state mock trial tournament. Spain Park won that competition, paving the way to the national tournament.

“One thing that’s remarkable about these students is that because they were trapped in New York, they had less time to prepare for state competition. Most teams have two weeks, and they only had one week. And they won,” Walsh said. “They obviously are very talented and worked very hard.”

Adams and Reese plans to hold a practice mock trial session to help prepare the team for the national competition.

The team is accepting further donations to help with expenses for national competition. Donations can be sent to: Spain Park Law Academy, 4700 Jaguar Drive, Hoover, Ala., 35242. For more information, contact Libby Day at lday@hoover.k12.al.us.