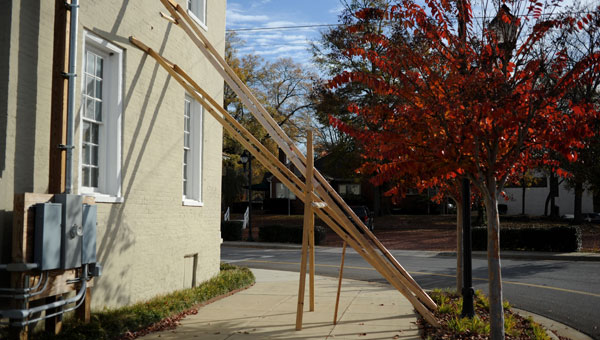 The county continues to work on the 1854 Old Courthouse, the county manager announced during a Jan. 28 commission meeting. (Reporter photo/Jon Goering)

Dudchock said the back wall of the courthouse, which was built in 1854, has been stabilized, and is “constantly monitored.” The contractor addressed the pins in the walls, and has worked to brace the outside wall.

The entire exterior of the building will be painted once construction is completed, Dudchock said.

During the meeting, Dudchock also said the County Services Building in Pelham will be expanded, as the city of Vestavia Hills recently signed a contract with Shelby County 911 for emergency dispatch services.

The commission approved a resolution to update the county’s Flood Damage Prevention ordinance.

“It allows citizens to be able to purchase flood insurance,” Cole said.

In other business, Harpersville Water Clerk Virtie Bell was announced to the DHR board.