Hilltop Montessori to delay opening on Monday and Tuesday 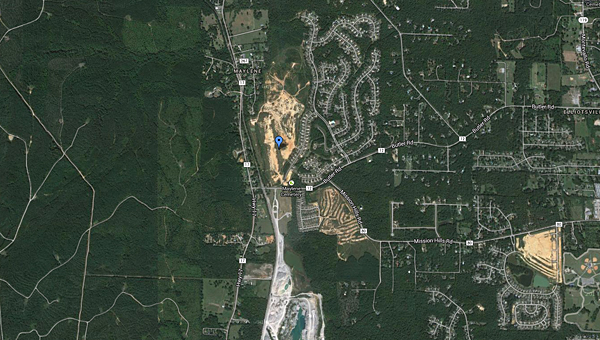 The South Grand View Development company has sued the city of Alabaster, claiming a 2011 rezoning cost the company “millions.” (Contributed)

An Alabaster development company has filed a lawsuit against the city, claiming Alabaster deprived the company “of its constitutionally protected property rights” when voting to rezone about 130 acres off Butler Road in 2011.

In a lawsuit filed in U.S. District Court on Dec. 3, representatives from the South Grand View Development Company claimed the Alabaster City Council caused the company “potentially millions of dollars in lost profits” when it adopted a new zoning ordinance during its Dec. 5, 2011 meeting.

According to a complaint filed in court by South Grand View Development, the company “invested millions of dollars developing” property off Butler Road, including the Grande View Estates subdivision.

According to Alabaster City Council minutes, the council voted unanimously during its Dec. 5, 2011, meeting to rezone the undeveloped 130 acres from R-7 town home and R-4 garden home districts to R-2 single-family residential district.

In its complaint, South Grand View Development claimed the R-2 zoning allowed less dense development than the company had planned for on the property, and claimed several undeveloped lots on the property were under contract with a builder when the city voted to rezone the property.

“The change in the zoning ordinance by the city caused the plaintiff to be in breach of its contract with the builder thereby causing plaintiff to lose the sale of said lots and potentially millions of dollars in lost profits,” read the complaint.

The company claimed it did not learn of the city’s decision to rezone the 130 acres until “after the time for appeal to the Circuit Court for Shelby County had expired.”

In the complaint, the company claimed the city violated its Fifth Amendment rights by “taking private property without just compensation therefor” and violated the company’s due process to appeal the rezoning to the Circuit Court.

The company is seeking a jury trial in the matter and “actual and compensatory damages a jury may assess.”

During Dec. 6 phone calls, Alabaster City Attorney Jeff Brumlow and Alabaster Mayor Marty Handlon said they did not wish to comment on the pending litigation.