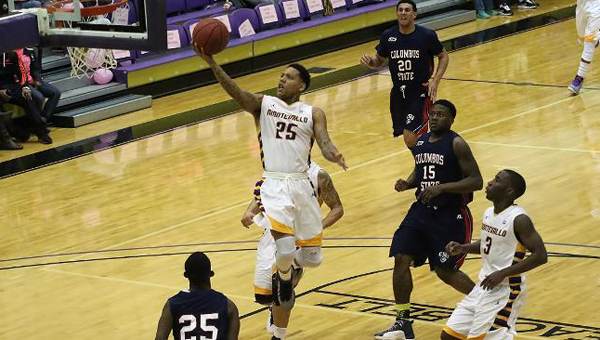 Going for their fourth-straight win, and 16th win in 18 games, Montevallo fell behind early on the road.

UM trailed 18-10 halfway through the first half. The Falcons then proceeded to go on a 22-9 run that culminated with back-to-back three-pointers from Shykeem Jackson and Troran Brown.

During the run that put the Falcons on top, Jackson and Brown combined for 18 of the 22 Montevallo points.

Before the half, Jackson would add another three-pointer, but the Saints came back to even the score at the break, 37-37.

The second half started off with a Bryant Orange three for UM, which would be the start of a 12-0 run.

Flagler would eventually claw back to get the lead to within single digits late, but could never get closer than five points, eventually falling to Falcons by the final score of 91-81.

Brown finished with 29 points, just two points shy of his season-high. He also dished out 10 assists, recording his sixth double-double of the year. The Peach Belt leader in points per game and assists shot 50% from the floor and made all eight of his free throws.

Jackson finished the game with 19 points. He made half of his eight three-point shots and shot 75% from the free throw line.

Junior Malik Fields finished with a career-high 16 points and tied his career-high with nine rebounds. The San Francisco native’s nine boards were a team-high.

With the victory, Montevallo (20-8, 16-2) completed their fourth straight season with 20 wins in addition to having already captured their fourth consecutive PBC West crown.

This is the first outright conference regular season title for the Montevallo men’s basketball team since joining the Peach Belt in the 2009-2010 season.