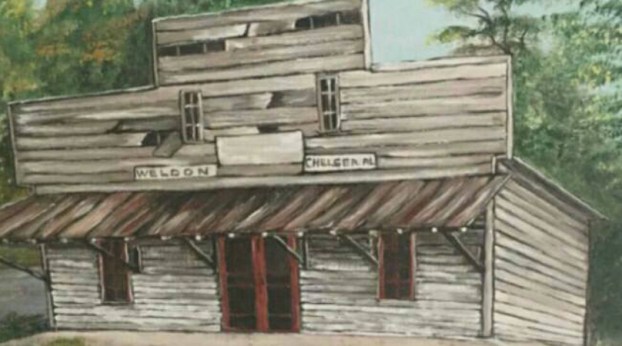 The Chelsea Historical society is currently in the process of forming. Prints of “The Gathering Place,” created by Marie Kendrick Alverson were sold to aid the historical society’s efforts to raise funds for the community. (Contributed)

CHELSEA- Chelsea resident Tony Nivens is currently in the process of forming the Chelsea Historical Society. According to Nivens, the organization has already acquired its corporate name, which was approved by the state of Alabama on Tuesday, Feb. 28, and the next step is to establish the organization’s board of trustees and getting the group recognized

“This is moving a lot faster than I expected it to. My vision is sharing Chelsea’s history, so people can discover it and love it,” Nivens said. “I always grew up with a love of Chelsea history. My mom wrote a book about Chelsea, so I’ve always been hearing Chelsea stories.”Nivens said he got the idea after he noticed conflict between Chelsea residents regarding the dismantling of the Weldon building at the beginning of February.

“We all saw some of the firestorm on social media between the newcomers and the older folks,” Nivens said. “I was trying to establish a bridge between the two sides and put some things in perspective.”

According to a post on the organization’s Facebook page, the Chelsea Historical Society is considering moving into the Crane House after it becomes vacant. The Crane House currently holds the Chelsea Public Library, which is set to move to a larger location this year.

Nivens also contacted the Chelsea City Council to request that a council member serve as a liaison between the historical society and the city.

Local artist Marie Kendrick Alverson began selling prints of her painting of the Weldon building, called “The Gathering Place” to help the Chelsea Historical Society raise funds for the new Weldon Pavilion on Saturday, Feb. 25 at the Chelsea Arbor Day celebration. Prints are still on sale, and can be ordered through email at ChelseaThenAndNow@gmail.com.

Nivens said the Chelsea Historical Society aims to celebrate Chelsea’s past while keeping the city welcoming and inclusive to newcomers.

The Chelsea Historical society is open to volunteers. Anyone who wants to donate or get involved with the group can send an email to ChelseaAlHistoricalSociety@gmail.com.