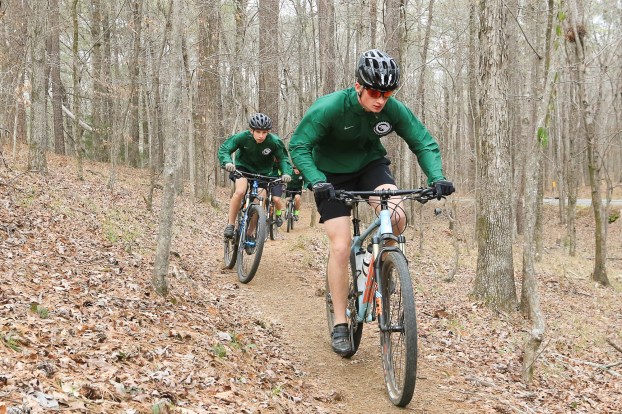 After warming up and running drills for about 15 minutes, the teams hit the trails for about an hour to put their skills to the test. (For the Reporter/Dawn Harrison)

PELHAM – For Pelham High 11th-grader Robert Plummer, riding down the side of a mountain at 15 miles per hour is a soothing and relaxing way to take all of his stress away.

PHS junior Conner Forbus compared the experience to being a wolf running through the forest.

Plummer and Forbus are members of the Pelham High School Mountain Biking Team and their competition season is in full swing.

PHS English teacher Ryan Dye said he started the mountain biking team three years ago because he wanted to share the sport he enjoys with others. Riverchase Middle School also has a team. Between the two schools, there are 10 students participating in the program.

The middle and high school teams practice together at Oak Mountain State Park at least three times per week. They begin every practice by doing drills in a field near the South Trailhead before taking to the trails.

Although weekday practices only last for about an hour to an hour and a half, Saturday practices can last for three to four, and sometimes five hours.

“We have some fast and strong middle school riders who are able to keep up with the high school students,” Dye said.

On cold or rainy days they practice in the spin room at the Pelham YMCA.

The team is part of a league called the National Interscholastic Cycling Association and they began practicing in January and their first race of the season was on March 5.

The day before every race, competing teams are allowed to ride the course to become familiar with it and coaches give pointers on the best way to navigate the terrain, RMS coach Michael Higginbotham said. On March 18, the teams traveled to Auburn to begin prepping for their second race, which was on Sunday, March 19.

The team has one biker, Sabrina Ross, who is ranked in the top 10 for JV girls. Ross currently holds the No. 8 spot. Other team members, Dennis Maldonado, Robert Plummer and Cole Stewart are also ranked. Overall the team is ranked 11th out of 26 teams in their division.

Dye said one of the more difficult skills the teams continue to practice is how to safely pass someone on trails that are often pretty narrow.

“We teach them how and when to pass someone,” Dye said. “You have to pick your spot, be assertive and communicate what you’re about to do.”

The students compete in very individualized heats, Dye said. Students race by grade level and each grade level has a separate heats for girls and boys. Dye said races could include up to 50-60 bikers.

Right now most team members provide their own bikes, but Dye said the teams are looking for sponsors and trying to build up enough money to buy bikes for kids who don’t have one but would like to participate.

The season ends in May with the state championship race at Tannehill State Historic Park in McCalla.

Those who are interested in sponsoring the teams can contact Higginbotham at mhig67@yahoo.com or Dye at rdye@pelhamcityschools.org.