Story and photographs by Laura Brookhart

Eric Poland of Pelham is a contemporary abstract illustrator with a focus on local architecture and nature. His artistic inspiration began as a child when he enjoyed drawing still life and landscapes.

Now, his primary inspiration comes from the buildings of the newly awakening city of Birmingham. Vivid colors, contrasting lines and abstraction characterize his style. 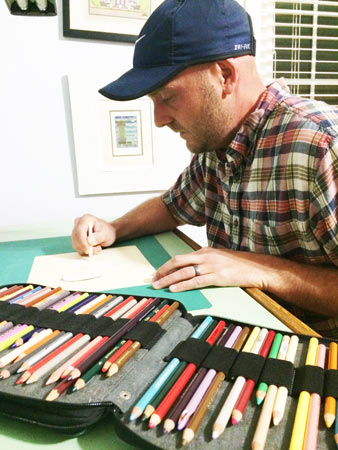 Artist Eric Poland works on another drawing. His inspiration primarily is intuitive for each piece, but they all represent a different way of looking at Alabama.

“As early as I can remember, I was drawing,” Poland recalls. “It came naturally and I had a journal in which I sketched daily. I remember in school being complimented on my drawings, but at the time, I never thought of it as a talent.”

Growing up with his father in the military, Poland spent the majority of his youth in Germany and Anniston, Alabama, but also lived shortly in Texas and California.

“Everyone has their own way of growing up, and moving around as our family did seemed to have the effect of endearing me to the many architectural styles and elements I saw throughout those years,” he said. “My dad was stationed at Fort McClellan until I was 3, then we moved to Germany for the next eight years. When he was given a choice of station, I asked to move back to Alabama because my childhood friend was here.”

There, Poland began his studies at Jacksonville State, where an art professor recommended he look into the University of Montevallo’s art program. Poland transferred there his junior year and received his MFA in 2006.

His UM senior show concentrated on editorial illustration, which used a combination of both hand-drawn and computer illustration. This style is indicative of his current creations, which may be seen at Naked Art Gallery in Birmingham and Alabama Goods in Homewood.

Currently, Poland is a stay-at-home dad with his 3-year-old son and 2-year old daughter.

“I definitely enjoy the bond that I have with my children and the flexibility in my schedule,” he said. “I work with them on the alphabet and numbers and colors, and to see them grow gives me a sense of worth and enjoyment.

“My oldest loves to build things, so often we will get my old art scraps and I will draw roads or bridges and he will put them together to make a whole city,” Poland continued. “My youngest is more like me, and loves to color and draw. As she draws, I finish it out by making a bird from her circle—it’s fun to create drawings from her squiggly lines.”

Poland has shown his work at Montevallo Arts Festival and Montevallo Artwalk, where he will again show in fall 2017. This spring he will be at Magic City Art Connection and the Gumbo Gala, with his winning crawfish logo.

“At shows, I’ve had people say, ‘I’ve never seen anything like this before’ which makes me feel like there is some magic behind my art,” he said. “My intention is to do something different—add a modern edge with clean lines via graphic design.”

Poland also has an official license agreement for his Bryant-Denny Stadium drawing, which is only sold at art shows.