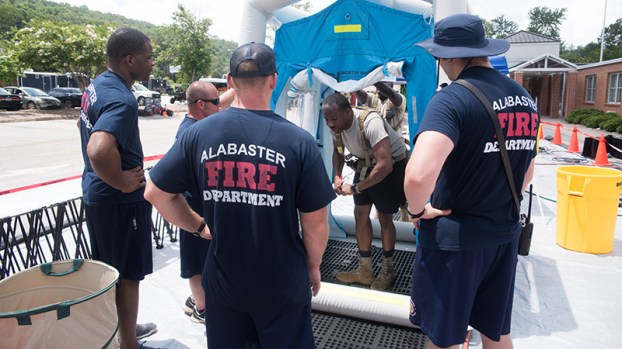 Alabaster firefighters take part in a hazardous materials decontamination exercise at the former Valley Elementary School in Pelham in June. The department has seen an overall rise in its number of emergency responses compared to last year. (File)

ALABASTER – The Alabaster Fire Department has seen a steady increase in its number of responses during the first half of 2017 when compared with the same time period in 2016, according to the most recent AFD activity report presented to the Alabaster City Council.

During its July 24 meeting, the City Council reviewed the AFD activity report as of June 30, which confirmed a significant rise in the department’s number of incidents and responses.

In June, the department’s actions saved $494,000 worth of property, bringing the midyear saved property total to nearly $1.4 million.

The department also saw a busy training month in June, recording 1,710 staff training hours to bring the year-to-date total to 14,274 hours. The training hours are on par with the 14,629 total from the first six months of 2016.