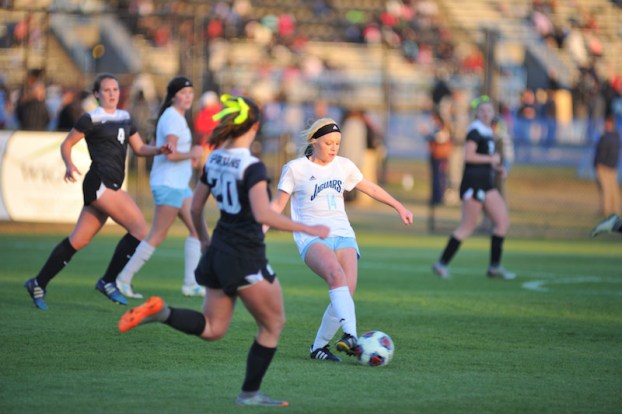 Spain Park's girls soccer team picked up a crucial win against Mountain Brook to get to improve to 1-0 in an area that features three top-five teams. (For the Reporter/Larry Dancy)

By SETH HAGAN | For the Reporter

HOOVER – The Spain Park girls varsity soccer team picked up a big win on the season and a key Area 6 victory standing tall at home, 1-0, against fellow 7A top-10 opponent Mountain Brook on Tuesday, March 13.

Both teams struggled to score, but the Jaguars were the aggressors throughout the evening firing off 11 shots in the first half and another 14 after halftime.

Mountain Brook was forced into more saves in the first half than Spain Park fielded the entire game with five and had 13 when the final buzzer sounded.

The Spartans had their chances as well and nearly took the lead before the end of the first half.

Mountain Brook charged hard with the final seconds ticking off the clock and sent a shot screaming past the Jags for what seemed like a go-ahead goal, but the referees concluded the shot was attempted just after the final whistle.

The close call fired up Spain Park for the second half as they pressed even harder on offense. Their accuracy improved as well, putting nine of their 14 shots on goal.

A free kick at the 48-minute mark gave the Jags the opportunity they needed as a shot to the right side of the net slipped through the Spartan goalkeeper’s hands for the winning score.

Spain Park’s defense at home was remarkable as well only allowing eight shots all night with just three of those on goal.

The Jags are now 8-3 overall, but more importantly 1-0 in an area that features three top five teams.

The fifth ranked Jaguars have a chance next week to knock off the state’s No. 1 ranked team in 7A when they head out on the road for a square off with area foe Spain Park. The match is set for Tuesday, March 20 at 7 p.m.