Thompson falls in 7A title game 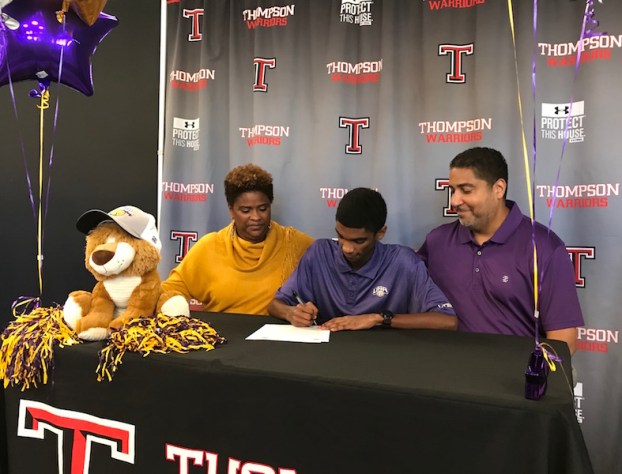 Thompson’s Brandon Lee signed a scholarship to attend the University of North Alabama on Thursday, Dec. 6, after a record-breaking career with the Warriors. (Reporter photo/Alec Etheredge)

ALABASTER – Standing up in front of his teammates, friends, coaches and family, Brandon Lee tried to give a speech thanking everyone that had helped him along the way to signing with the University of North Alabama on an athletic scholarship, but instead, the normally chatty Lee, couldn’t finish his statement before tears started to flow.

Those tears really started pouring out when he tried to thank his parents for everything they had done for him, as the senior Thompson track and field and cross country runner put his signature on the dotted line to join the Lions for his collegiate career on Thursday, Dec. 6.

“I love my parents,” Lee said before a long pause of trying to hold back tears before saying, “That was ugly man. That was ugly. I didn’t think I would even cry. This just means a lot.”

“I’ve been working very long for this and never thought I would be here,” Lee said. “I have to thank everybody that has played a part in this, I love each and every one of you. You guys make me happy.”

During his senior season running cross country for the Warriors, Lee finished inside the top 10 seven times in nine races, including one first place finish and three top three finishes.

His dominance in that sport, as well as track and field, is something that will be missed by his teammates and head coach Chris Schmidt.

“His work ethic here was absolutely amazing,” Schmidt said. “Morning runs, long runs, Sunday long runs, I love it. I look at him as a son and have enjoyed all of the memories we have created together.”

And while Schmidt was obviously impressed by his skillset and work ethic every day, it was something else that really stood out as a lasting memory.

During his junior season, Lee was injured late in the cross country season after winning three regular-season titles and finishing inside the top seven in every race, but it put a damper on the end of his season right around the state championship meet.

Lee, however, wasn’t going to let that keep him from being a good teammate to the rest of the guys still trying to learn as young runners.

“When he was coming back from the injury, he took his time with it and didn’t force himself back,” Schmidt said. “But while he was trying to work himself back into shape, he was working with the freshman. That says so much about his character. It says that it’s not just about him, it’s about this program and about the future. It shows you how passionate he is about the sport of running.”

Lee will now take that passion for the sport on to the University of North Alabama where many people back at Thompson will keep track of their teammate’s success.