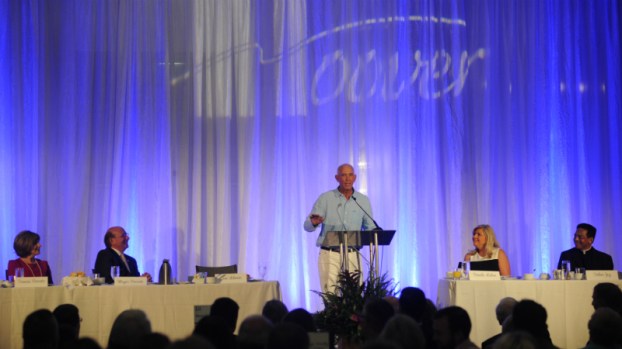 HOOVER – Champion golfer Tom Lehman urged those in attendance at the 37th Hoover Mayor’s Prayer Breakfast on Tuesday, May 7, to “go with God.”

“Going forward with God is the right way to go,” Lehman said during the event at the Hyatt Regency Birmingham – The Wynfrey Hotel. “God doesn’t go behind us. He goes in front of us.”

The Prayer Breakfast was hosted by the Hoover Beautification Board. Tickets to the event sold out in about three weeks, and there was a capacity crowd of about 600 people in attendance to hear from Lehman and Hoover Mayor Frank V. Brocato.

Lehman, who lives in Arizona, said he first spent time in Birmingham visiting the Pratt City community following the deadly storms of April 27, 2011.

“To a person, they were saying, ‘We feel blessed to be alive,’” said Lehman, who during his 37-year professional golf career won more than 30 national and international tournaments, including five PGA Tour events.

Before Lehman’s address, Father Joy Nellissery, associate pastor at Prince of Peace Catholic Parish, offered an invocation and blessed the food, reading God’s command to Joshua in the Bible: “Haven’t I commanded you: be strong and courageous? Do not be afraid or discouraged, for the Lord your God is with you wherever you go.”

Nellissery said he initially had in mind to read a different verse but felt compelled to read from Joshua instead.

Lehman revealed that he had adopted the verse from the book of Joshua as a “life verse” soon after committing his life to God as a 15-year-old.

Brenda Ladun with ABC 33/40 welcomed attendees to the Prayer Breakfast.

“I’ve raised my three boys here in Hoover, and I can honestly say this is my favorite city in the whole world,” Ladun said.

Brocato noted that cards were placed on tables at the breakfast that were intended to serve as an aid to help residents pray for the city.

“As we continue to grow, it’s important that we spend time in prayer,” Brocato said. “There’s power in prayer, and we all have this power.”