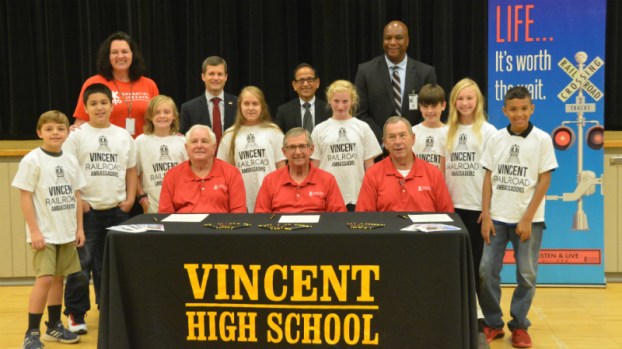 “We could not do the things we do at Vincent Middle High School without the support of these three mayors,” Principal Michele Edwards said about the mayors, each of whom represent residents who attend the school.

Nancy Hudson, executive director of Operation Lifesaver, said such ceremonies were being conducted across the United States and Canada.

Hudson gave some statistics about train collisions: a person or vehicle is struck by a train every three hours in the United States, a motorist is 20 times more likely to die in a crash involving a train than in a collision involving another vehicle, and preliminary data shoes that within the 81 Alabama vehicle crashes involving trains in 2018, there were 39 injuries and 12 fatalities.

“We have to do something,” Hudson said.

“Operation Lifesaver, state agencies, railroad companies, and state and local law enforcement are joining together to heighten awareness about the importance of rail safety by urging all motorists to obey signals, gates and other safety devices at highway-rail grade crossings and all pedestrians and cyclists to stay away from the tracks,” the proclamation read.

The ambassadors will help plan and promote activities that increase rail safety awareness.