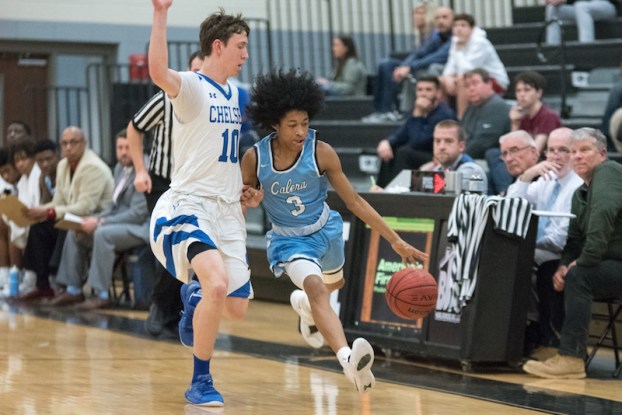 The Calera Eagles lost two talented players to graduation, but will still return one of the best rosters in the county this season. (File)

The Calera Eagles were on the verge of a special 2018-19 basketball season, but a one-point loss to Helena in the area tournament and a three-point loss to Opelika in the first round of the playoffs left a sour taste in their mouths.

Now, despite losing All-County players C.J. Smith and Cornelius Brown, the Eagles are back with a strong lineup for the 2019-20 season ready for redemption.

“We’re very excited for this season,” assistant coach Adam Lawson said, who has been with the team a lot early in practice due to head coach George Drake taking care of a personal matter. “We’ve had some new guys come in and have three great seniors coming back as well as some juniors that got significant time last year.”

Replacing Smith, last year’s point guard, and Brown, an athletic and tall playmaker, means replacing 16.3 and 19.3 points per game, respectively, as well as two players that could make plays all over the floor in multiple facets of the game.

“CJ was a four-year starter on varsity,” Lawson said. “That’s experience that’s tough to replace. Cornelius was in big games too. He performed for us. But, we have found some of our best freshmen over the last few years to be ready to go for this exact moment.”

Laparris Whatley and Chad “Duke” Chambers will be two players looked upon to step in and fill those big shoes.

Chambers, a point guard, has been on varsity since ninth grade and is still just a junior, but he’s played in big games and will be an exciting playmaker to watch this season. He can make a move to get to the basket, but is also a great facilitator of the ball.

As far as Whatley goes, Lawson said he’s the glue that holds the team together and brings the energy to the team. Lawson said he saw that last year a lot and that will be the same this year as well.

Those two won’t just be looked at as leaders offensively, but also the defense, which is going to be the focus of this year’s team.

Despite scoring 60, 70 and even 80 or 90 points at times the last two years, Lawson had no hesitation in saying this year’s team will start with defensive play.

“We don’t look at the game from an offensive standpoint,” Lawson said. “We are a defensive team that wants to play full-court man. If we can force turnovers and run the break, that’s our bread and butter.”

Both leaders also eluded to how important improving defensively is going to be this year and what they’ve been doing to make sure it happens.

“We did a lot more conditioning in the offseason,” Chambers said “With guards, we have to stay energized more often. There have been more one-on-one guard drills in practice so we can get a feel for the pace and energy we need.”

“We’ll do defensive slides, tail down and head up and other drills in practice,” Whatley said. “It’s the little thigs matter to us on that side of the ball.”

Last year, the Eagles lost eight games by 10 points or less and five by three points or less, and while working on defense will help in those close games, Lawson and the team know that turning the ball over in late-game situations was costly last year.

“We practice a lot of late game situations to not turn the ball over and we have to know when to take shots,” Chambers said. “Sometimes we would take shots or make an errant pass when we didn’t need to.”

Whatley said the team has worked hard on protecting the ball and making sharp passes and good cuts to help late in games.

“We just couldn’t close games last year,” Lawson said. “We’d beat teams up and wear them down, but couldn’t close. That’s something we’ve put an emphasis on this season. We get up by 10 or 11 points in the fourth quarter, we have to close those games.”

Other players that will step up this season will be junior Keshawn Haynes, who can play all over the floor and is possibly the best 3-point shooter and most athletic player on the team at 6-foot-5.

In addition to him, Isaiah Green and Rodriguez Smith are two transfers that will play big minutes this season as well.

While they compete in a very difficult area with a physical and deep Chelsea team, a strong Helena team and an athletic Pelham team, the potential is there for Calera to have a big year.

“I feel really, really good about this team. There is no false sense of hope,” Lawson said. “They compete every single day. Coach Drake has done a good job of implementing drills where they have to compete. If one guy loses, we all lose.”

Calera will open the 2019-20 season on Thursday, Nov. 7, on the road against Carver-Birmingham.