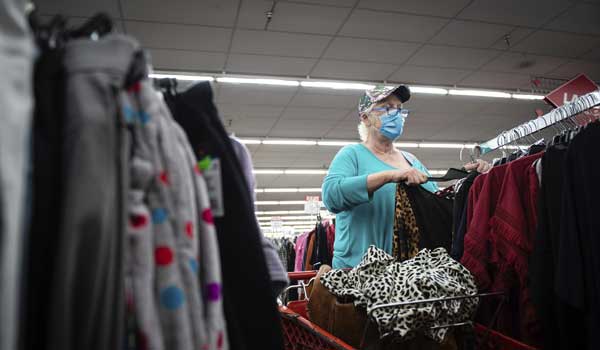 Libby Boggs browses clothes for a wedding at Martin's Family Clothing as state restrictions loosen amid the coronavirus outbreak, allowing retail stores to reopen, in Decatur, Ala. (Dan Busey/The Decatur Daily via AP)

MONTGOMERY, Ala. (AP) — Alabama’s number of new confirmed coronavirus cases broke the state’s one-day record Thursday as officials continued to urge people to not abandon precautions. The Alabama Department of Public Health reported more than 1,100 new cases in one day, the highest number since the outbreak began.
In total, the state has reported nearly 33,000 cases of COVID-19, the disease caused by the new coronavirus, and at least 880 deaths from the virus. More than one-fourth of the cases have been reported in the last two weeks.
“Two weeks ago, we had bent the curve. Today, it is trending sharply up,” Sen. Doug Jones said in a news conference Thursday.
Dr. Jeanne M. Marrazzo, an infectious disease specialist at the University of Alabama at Birmingham, said that there are some alarming indicators about the state of the outbreak, including a rise in the percentage of tests that are coming back positive in Alabama.
“People have been increasingly alarmed that over the last 10 days, two weeks we have continued to see marked increases in the number of cases reported,” Marrazzo said.
Dr. Don Williamson, a former state health officer who now heads the Alabama Hospital Association, said the number of hospitalized COVID-19 patients rose in the weeks after the Memorial Day weekend.
“I’m really, really worried about the Fourth of July. I think that will likely determine the trend for Alabama for the rest of the summer,” Williamson said Wednesday.
Alabama Superintendent Eric Mackey on Friday will announce plans for resuming the school year. Public school students finished the 2019-2020 school year at home doing distance learning after schools closed because of the pandemic.
The Alabama prison system on Wednesday reported the fifth death of an inmate who tested positive for COVID-19.
Allen Barton, a 59-year-old inmate at Staton Correctional Facility died June 23, according to a news release.
The prison system said Barton tested positive for COVID-19 on June 14 at Staton’s infirmary after exhibiting signs and symptoms of the disease.