Sanders named Pelham Officer of the Year for 2020 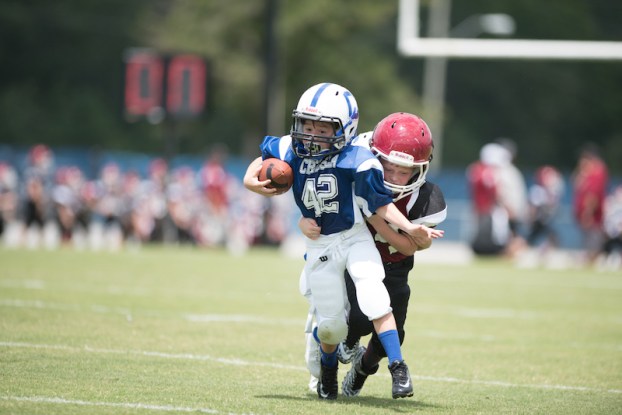 After a meeting on Sunday, July 26, the Jefferson-Shelby Youth Football League board members voted 6-5 in favor of canceling the upcoming 2020 season due to the threat of COVID-19.

“Due to uncertainty surrounding COVID-19, along with the current surge in cases over the past month, and the possibility of additional city, county and/or state shutdowns, it was determined to be in the best interest of the players, cheerleaders, coaches, spectators and league volunteers to cancel our 2020 season,” read a press release from the league.

The JSYFL, which consists of “Over the Mountain” teams in Jefferson and Shelby Counties, normally consists of more than 2,000 football players and cheerleaders.

This season there were approximately 200 football players and cheerleaders already signed up to compete in parks represented by the league despite the spread of the novel coronavirus. The JSYFL is open to those between first and sixth grade.

“It is with great disappointment that we must inform you that the 2020 Jefferson-Shelby Youth Football League tackle football season has been canceled,” said the Chelsea Park and Rec Department. “Obviously, this vote did not go the way our park leadership had hoped it would.”

Chelsea’s Parks and Rec Department, however, is going to continue to offer its flag football league for grades kindergarten through fifth. There are currently 140 players registered to participate.

Oak Mountain also shared its disappointment in no season being held at Heardmont Park this year.

“We are saddened to announce that the JSYFL has elected to cancel the 2020 football season,” read a release from Oak Mountain Youth Football and Cheerleading. “The overwhelming restrictions and guidelines we must follow to protect the health of our children with the COVID -19 pandemic have forced this decision on us. We are able to make a full refund of all registration fees for the season. Full details will be emailed to all registered. We are hopeful to get back to regular sports as soon as we are able.”

All those currently registered for fall sports in the affected areas should have received emails or will receive emails regarding refunds, while some in addition to Chelsea may also be offering alternative options.

“This decision was not made lightly,” the JSYFL said. “The league understands the decision to cancel the 2020 season will not be popular with everyone. However, we hope that everyone will understand the health and safety of all who are involved with Jefferson-Shelby Youth Football League has always been our main focus and was the primary reason for this difficult decision by the Member Parks and the League Board.”

As of now, the Shelby County Youth Football and Cheerleading league in Columbiana is still on as scheduled. For more information on the league, you can visit Clubs.bluesombrero.com/shelbycntyythfooball?fbclid=IwAR33K8WQMbyL8h6phgV2gcn2Zrt_4jOht5Z44jQgcPKhS8coSXSRCn7pJRI.

Calera and Montevallo are both still planning to participate in their youth football leagues as well.