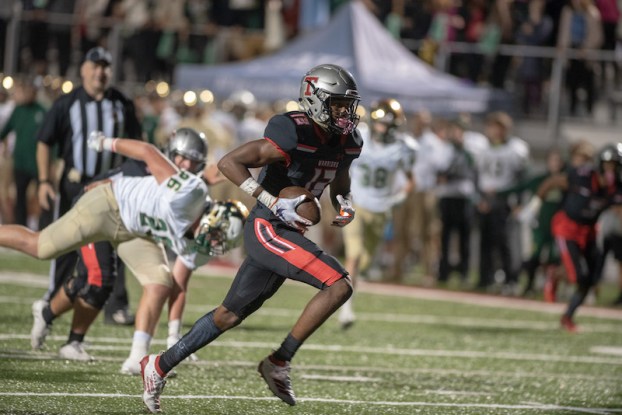 Thompson will enter the 2020 football season with what could be considered the most talented team in the state as the Warriors look to end the year as two-time state champions. (File)

ALABASTER – The Thompson Warriors enter the 2020 season as the team to beat and they know it.

Coming off their second state championship in school history and first since 1982 after a 40-14 thumping against Central-Phenix City in the title game, opponents want to make sure they don’t repeat, but they are primed to do so, and they aren’t scared of making that their goal.

Going into last season, the success of the Warriors was going to depend on how Sawyer Pate handled replacing Taulia Tagovailoa, one of the top quarterbacks in the country, as well as how a young defense could compete against some of the best talent in the state.

Well, Pate stepped in and had a 3,000-plus yard season with 40-plus touchdowns and the defense gave up just 21.2 points per game and improved as the season went along.

This year, the Warriors will once again be replacing Class 7As best offensive player at quarterback for the second consecutive year, but the majority of that defense that got better last year is back, while the offense is loaded at every position aside from quarterback.

That makes Thompson the No. 1 ranked team in the Class 7A preseason rankings, and deservedly so.

It’s been remarkable to see what head coach Mark Freeman has done for the Warriors in his first five seasons, taking the team from 0-10 the year before he got there to a combined 35-4 the last three years with back-to-back state championship appearances and their first title since 1982.

But in order for the team to reach its full potential, a new quarterback is going to emerge and that’s expected to be junior Conner Harrell.

He’s currently in a battle with senior Cade Golden for the starting spot, but Harrell was the backup last year and brings an athletic presence to the table that will make defenses have to respect his legs and his arms.

But ultimately, the starting quarterback will have to do more than replace Pate’s 3,125 passing yards and 41 touchdowns, they’ll also have to replace his ability to run the offense flawlessly, while also taking advantage of the array of talent at receiver and running back.

Those two positions will help take pressure off the eventual starter thanks to several returnees at both positions starting with Jarrett Crockett and Brandon Franklin at running back. 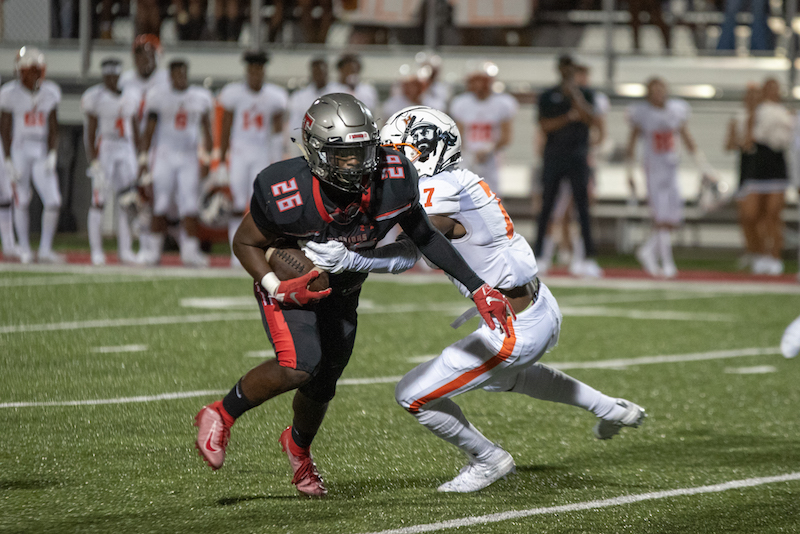 Crocket was in a backup role the last two years, but even in that role, he showed last year he could handle the starting job with 624 yards and a 10 touchdowns on 93 carries. The 10 touchdowns led all running backs last year.

Franklin adds another experienced back with a size of 6-foot-2, 220 pounds going into his junior season. He’s in line to take over the starting role next year and is a major threat between the tackles.

Sam Reynolds, who will play all over the field as the team’s best athlete, could spend time at the position and will bring a different dynamic to the position with his speed on the edge.

There will also be ample depth at receiver this year with the return of J. B. Mitchell and Tre Roberson.

While the Warriors will have to replace Mike Pettway, who topped 1,000 yards each of the last two years including 1,154 yards and 16 touchdowns last year, Mitchell and Roberson were threats all of last season and really emerged late in the season for the playoff run. 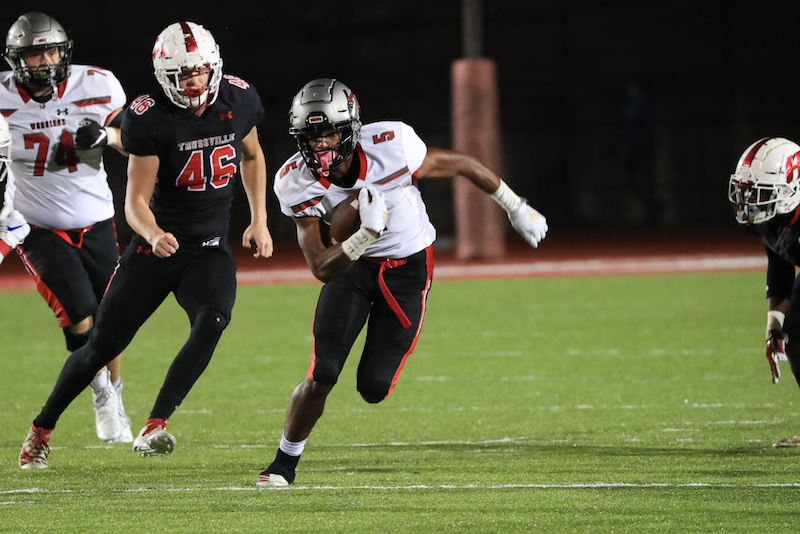 Those two should lineup on opposite ends of the field, adding two legitimate deep threats. In addition to those threats, Reynolds will help at the position as will Ryan Peppins, who are both speedy athletes that can take it to the house.

But what takes Thompson’s offense from being dangerous to possibly the best in the state is the return of the entire offensive line.

Seniors Michael Specht, Anthony Butler, Connor Howard and Anthony Kilburn all have a year of experience under their belt and know exactly what is expected of them. In addition to those four, youngster Noah Watts returns after an impressive freshman season and already holds a size of 6-foot-3, 255 pounds.

Defensively, the Warriors will be loaded with Division I talent at every level.

But the biggest losses to that side of the ball will come up front with the departure of Montaj Cook and Damion Ugbo. Those two combined for more than 100 tackles last year, including 29 tackles for loss.

Four returnees, however, will help soften the blow. K’Marion Hambright and Peter Woods will be leaders at the position. Following his sophomore season, Woods gained national attention with several Division I offers thanks to 15 tackles for loss and seven sacks, while Hambright has the experience of being a senior leader. Joining those two will be Greg Green and Kobe Stewart, who should be strong forces as well.

Those four will make the front seven strong, but the linebackers turn it into one of the best groups in the state and possibly the country thanks to the return of starters Jeremiah Alexander and Jax Van Zandt. 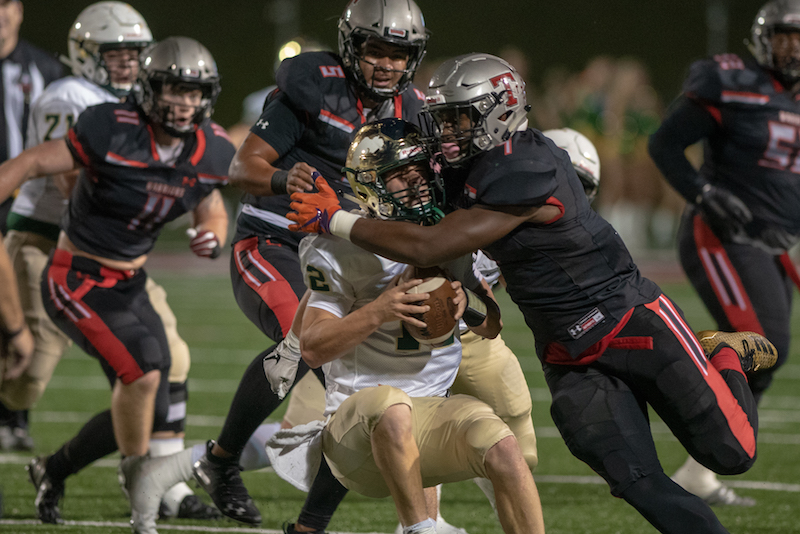 Alexander, who is considered a top-10 player in the country as a junior, totaled 118 tackles to lead the team last year, including 25 tackles for loss and 8.5 sacks.

And while many focus on Alexander, Van Zandt is a leader at the position and returns 79 tackles with 9.5 tackles for loss.

Joining those two will be juniors Ahmari Bolden and Nate Riddle, who bring back close to 100 combined tackles and will be leaned on for bigger roles this year.

The secondary will lose Ja’Vone Williams, who led the team with eight interceptions last year, but he’s the only departure.

Gavin Shipman returns for his senior season at cornerback and brings back five interceptions and 50 tackles and has gained plenty of recruiting attention.

Tony Mitchell also returns after totaling 60 tackles and one interception last year. Not only a great coverage player, Mitchell is a hybrid player that can move across the secondary due to his size and physical nature.

EJ Edwards will also be a key returnee to safety after totaling three pass deflections and one interception with 49 tackles last year.

Another key departure will come on special teams with the loss of Evan McGuire, who is now at Auburn. He handled all kicking duties for the Warriors last year, and now will look to be replaced by Trevor Hardy.

Prediction (9-1): Truthfully, Thompson could win every game this season, but the schedule is going to make that extremely difficult with two opponents ranked inside the top 70 nationally in Hoover and Hewitt-Trussville, as well as a matchup with defending Class 6A State Champion Oxford to kick off the season. The good news is the Warriors’ toughest games are spread out with Oxford week one, Hewitt week five and Hoover week 10. It will be tough not to have a slip up like they did last year against Hewitt-Trussville, but this year’s team is loaded at every position. The defense has the potential to be, and honestly should be, the best in the state. The offense will need a quarterback to step up and prove they can handle what Tagovailoa and Pate have, but in Freeman’s system, that’s a position you trust will come along, especially with the rest of the offense rich with talent. This team is too talented not to at least finish as one of the top two teams in the region, and probably should be vying for a repeat as state champions come December.