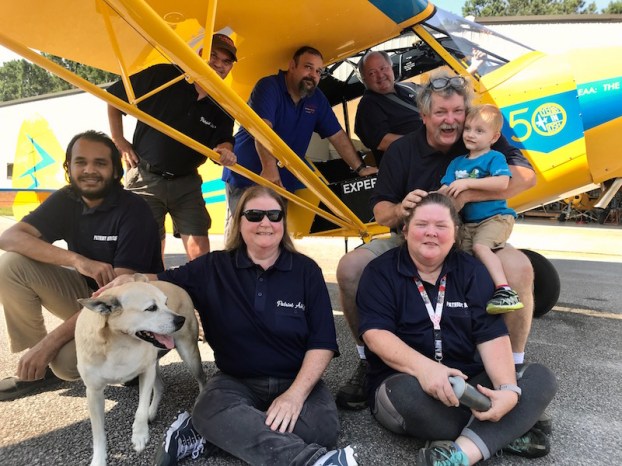 Helena resident Don Wade works on restoring airplanes, and recently finished one of his first projects known as “The Recruit.” (Contributed)

“The Recruit is the name of the first aircraft built by Patriot Aircraft,” Wade said. “It started with several years of putting together the idea, and thru many discussions of very valuable people of what was liked and disliked about these small aircrafts.’’

Wade is no stranger to aircraft, as he restored older aircraft through C&D Aviation, which takes older planes and restores them in a way that keeps them ready for flight for years to come.

Planes restored through C&D Aviation have been on the cover of Sport Aviation magazine, Vintage magazine, and have won awards like the Prestige Craftsman Award at Oshkosh in 2018.

The Recruit was designed with knowledge gained through restoring these older planes. The goal with this plane is to provide better quality for the future of the small airplane industry, as well as attention to detail and improved accessibility.

“So our goal is to incorporate these ideas and provide a light weight, higher legitimate useful load, ease of maintenance, accessibility with excellent load characteristics making it an easy plane to fly,” Wade said. “As a bonus it also makes it a cost efficient one to fly.”

Some of the differences that “The Recruit” offers are a larger than most access door, the cabin is 4 inches wider than a standard super cub, easier access for maintenance and inspections and all metal is epoxy coated not powder coated, and it has CNC machined aluminum components and titanium for strength and lighter weight in several areas.

This plan is designed with years of experience in the aircraft field in mind to create the best and most efficient aircraft possible.

“For cost effectiveness we are using the 0200 engine built by Don’s Dream Machines that is very fuel efficient. Along with an Acme shock system that will absorb hard landings which in turn saves the aircraft and rugged design but light weight of the airframe,” he said.

“Due to the change and design of the wing tips and aileron (being full size not tapered like earlier cub design), it is more than 20 inches out on the wing than a standard super cub, giving it improved control ability at low speeds.”

Wade and Patriot Aircraft intend to raffle the plane at the end of 2021 Airventure, which is an annual air show put on by the Experimental Aircraft Association in Oshkosh, Wisconsin.

Patriot Aircraft plans to produce more of “The Recruit” with an estimated delivery of January 2021.