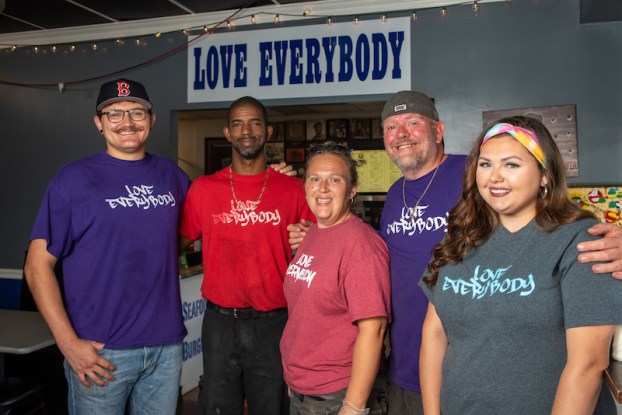 Caleb Kelley, Darrell Rollen, Stephanie Cholewinski, William Cholewinski and Harley Kelley are on the team that is bringing another location of the popular Alabaster restaurant Chubbfathers to Chelsea. (Reporter Photo/Keith McCoy)

CHELSEA – A restaurant already familiar to many Chelsea residents is returning to the city this fall.

Chubbfathers owner William Cholewinski and his family are preparing to open a new location of their popular Alabaster restaurant in the former Johnny Ray’s space in Chelsea’s Benson Plaza in early October.

Cholewinski said the “unfinished business” of Chubb’s Grub Station, his previous Chelsea restaurant that opened about five years ago but eventually closed, was a big motivator in his taking advantage of an opportunity to come back.

“I love this community,” he said. “I hated to leave when we had to leave the first time. I knew that we would be back eventually.”

The patronage from Chelsea residents remained strong after the first location closed. The Chubbfathers food truck is popular in the city’s neighborhoods, plus many people drive from Chelsea to eat at the Alabaster restaurant.

Cholewinski said when Rick Benson, the owner of Benson Plaza, approached him about opening another restaurant, everything seemed to line up.

“They made the Chubbfather an offer he couldn’t refuse,” Cholewinski said.

Cholewinski’s nephew, Caleb Kelley, and his wife, Harley, will oversee the Chelsea restaurant.

“We’re trying to keep the business in the family and branch out,” Harley Kelley said. “We’re very excited.”

“I’m hoping this will be a cornerstone for financial stability for their lives moving forward,” Cholewinski said.

The Chubbfathers menu at the Chelsea restaurant will feature the same staples as the Alabaster menu, including wings, tenders, poboys, burgers and sandwiches, and fan favorites such as the Buffalo chicken cheese fries and Zydeco and Chubba burgers.

“In Alabaster we are known for our Zydeco burger,” Harley said of Chubbfathers signature bacon cheeseburger dressed with lettuce, tomato, Cajun horseradish and onion straws. “I’m pretty excited to see how that goes over (in Chelsea) and see what folks think about it there.”

Cholewinski said he has redone the kitchen floor and painted the walls inside the new restaurant the shade of royal blue he uses for Chubbfathers, noting the color is close to the Chelsea blue.

“We’re putting our own little touch on things,” Harley said. “I grew up in Chelsea, so I’m really excited to be back, see some folks from my childhood and see how we do.”

Chubbfathers has a long history of partnering with the community to help people in need, particularly through food donations.

Once the Chelsea restaurant opens, customers may bring non-perishable food items with them and receive a free drink.

Food items will then be donated to local food banks.

“We are here to be good corporate citizens, and we’re here for the community,” Cholewinski said. “If there is anything we can do to help anyone, they need not ask. We will be at the community’s disposal and look forward to the opportunity to earn their business.”

Cholewinski said he hopes to park the Chubbfathers food truck in the parking lot of the new Chelsea restaurant as early as next week to serve lunch to customers from 11 a.m.-2 p.m. each day.

To stay up-to-date on the Chelsea restaurant’s opening, follow Chubbfathers Chelsea on Facebook and Instagram, or listen to Breaking Bread with AJ and the Chubbfather on Saturdays from 6-8 p.m. on Talk 99.5.