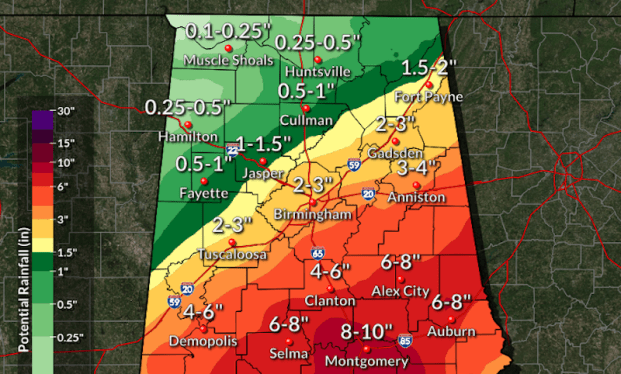 Hurricane Sally will make landfall on Tuesday with heavy rain headed toward central Alabama on Wednesday and Thursday. (Contributed)

As Hurricane Sally pounds the the Alabama, Mississippi and Louisiana Gulf Coast as a category 2 storm, it will soon take a curve to the northeast where the slow-moving storm will bring heavy rains to central Alabama.

Sally is expected to make landfall early Wednesday morning, but is only moving at approximately 10 mph. With that slow movement, the hurricane isn’t expected to make much movement during the next 24 hours, with the center going from just off shore on Tuesday morning to right around the Mobile area late Wednesday night.

But by Thursday around 1 p.m., the storm will start to move more toward south-central Alabama, which will lead to the locally-heavy rainfall. 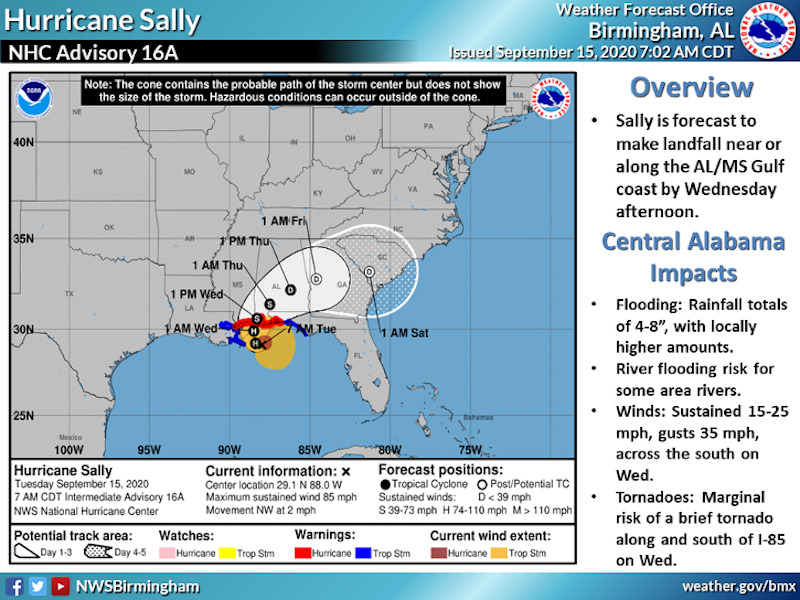 The good news in Shelby County is that the path originally had the center coming through central Alabama, but it has now taken a more eastward turn with the center staying closer to Montgomery.

That puts the county on the less dangerous side of the storm as it starts to weaken on land, but the rainfall is still expected to be heavy at times between Wednesday and Friday mornings with clearing set throughout the day on Friday.

The National Weather Service out of Birmingham predicts the possibility of 4-6 inches of rain for the majority of Shelby County during that timespan with heavy bands of rain coming through.

But there currently isn’t a threat of severe weather with the focus being on flooding with a flash flood watch issued for counties along Interstate 59/20 and south.

Parts of the Gulf Coast, including the Mobile and Gulf Shores area could get between 15 and 30 inches of rain as the category-2 storm makes landfall.

The storm will weaken quickly from hurricane to tropical storm to tropical depression once it makes landfall, which will diminish the wind threat. The rain threat, however, will remain high throughout the next 48 hours.

Alabama Gov. Kay Ivey has issued a State of Emergency due to the storm and the state has also been approved for an Emergency Disaster Declaration.

On the backside of the storm, a cold front will move through almost simultaneously with highs expected to be in the mid 70s and lows in the 50s and 60s for the next week.