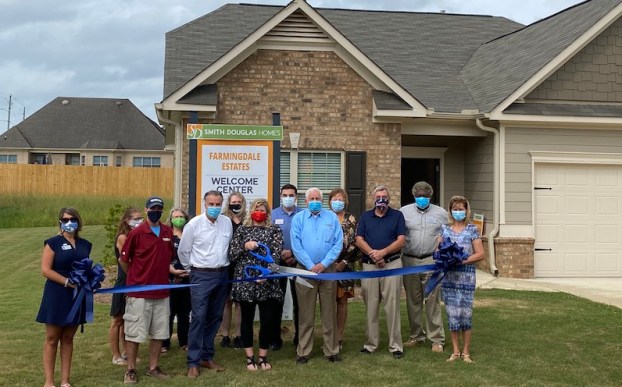 Staff and board members of the Shelby County Chamber, residents of the community and several members of the Harpersville Town Council, including Mayor Don Greene, gather for a ribbon cutting ceremony at the Farmingdale Estates development. (Contributed / Kathy Copeland)

By KATHY COPELAND / For the Reporter

HARPERSVILLE — It’s not often that on ribbon cutting day of a housing development, the words “already SOLD OUT” are part of the announcement but that is exactly the scenario that played out on Tuesday, Sept. 15 at Farmingdale Estates in the town of Harpersville just off Alabama 25.

The builder, Smith Douglas Homes, is in the second phase of development and—despite the pandemic causing a delay in the ribbon cutting ceremony—its popularity amongst homebuyers looking for affordable quality has not taken a pause.

In fact, according to Chris Smith, the construction manager, the third phase is currently in the final stages of internal review at Douglas Smith Homes and according to officials with the town of Harpersville, “The approvals on their end are complete.”

The ribbon cutting ceremony included staff and board members of the Shelby County Chamber, residents of the community and several members of the Town Council including Mayor Don Greene and Councilmembers Martin Dates and Janet Gill.

Greene welcomed everyone and talked briefly about the history of the development, boasting mainly about the success of the sales team with high marks added in for the coordination and cooperation of the builder to offer such a quality neighborhood nestled in a country setting.

Twenty-eight homes have been recently sold and there are about 11 that have not started construction yet.  The third phase “will include 106-120 homes,” said Smith.  “It really depends on the final design of the engineers.”

According to Caldarello, “the lots in phase three will be slightly smaller, which was one of the factors driving the peaked desire for homeowners to grab the lots in this phase quickly.”

Diane Rogosky and her husband, Steve, who are from Delaware, will be moving into the community at the end of October.  “We love the outdoors, we like the proximity to hiking and bike riding and conveniences without having to be in the city,” said Diane. “We went with the ranch home because of the spacious feel.”

The third phase is still about a year off and will have a different name, but the quality of the home will still be Smith Douglas quality according to Greene.

Stephanie Caldarello can be reached 205-306-9423 for more information about this community.