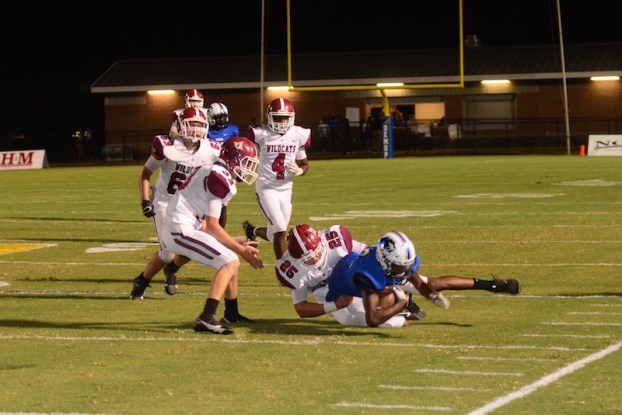 The Shelby County Wildcats pulled within eight points at 28-20 late in the third quarter, but Demopolis ended the game with 20 unanswered points to close out a 49-20 region win. (For the Reporter/Andrea Burroughs)

By ANDREA BURROUGHS | Special to the Reporter

DEMOPOLIS – The Demopolis Tigers won their third straight region game with a big victory over the visiting Shelby County Wildcats on Friday, Sept. 18.

Shelby County pulled within eight points late in the third quarter at 28-20, but from there, the Tigers finished the game with 20 unanswered points to complete a dominant 48-20 region win.

The Wildcats were unable to convert the interception into points and turned the ball over on downs with 9:18 in the first quarter.

The Demopolis Tigers scored on their next possession when Drake completed a 34-yard pass to Craig Nichols. Cole Wilson’s extra point was good, and the Tigers took a 7-0 lead over Shelby County with 8:18 to go in the first quarter.

Shelby County’s last possession of the first quarter stalled, and the Tigers took over at their own 8-yard line.

Hayes Atkins scored next for Demopolis when he ran it in from the 2-yard line. Wilson’s PAT was good and upped the Tigers’ score to 14-0 with 11:20 in the second quarter.

With 3:46 left in the first half, Atkins scored again on a 4-yard run. Wilson’s kick was good, and the Tigers increased their lead to 21-0 with 2:54 left in the second quarter.

Shelby County got on the board late in the first half when quarterback Connor Aderholt completed a 29-yard pass to Tyrese Goodman with 0:56 to go in the second quarter. Kai Barnett’s PAT was good, and the Wildcats had cut into the Tiger lead 21-7.

Demopolis answered the Wildcat’s touchdown moments later when Kelvin Rowser ran it into the end zone from the 3-yard line. Wilson’s extra point was good, and the Tigers had a 28-13 lead with 6:03 left in the third quarter.

Atkins scored on another 2-yard run for the Tigers, and Wilson continued his streak of extra points, giving the Tigers a 35-20 lead with 8:31 left in the game.
At the 6:55 mark, Drake found Jaqualon Smith for a 35-yard touchdown. Wilson’s PAT was good, and Demopolis extended their lead to 42-20 with 6:09 left in the fourth quarter.

The game’s last score came with 2:08 left to play, and Drew Seymore ran 7 yards for the touchdown. Time expired before Wilson could kick the PAT, making the final score of the game 48-20.