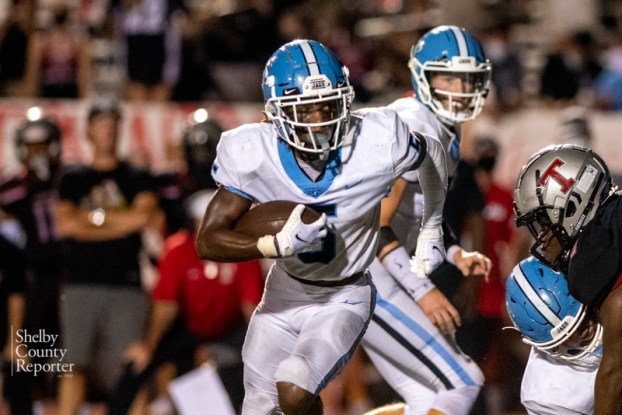 Spain Park mounted a late comeback against Gadsden City on Friday, Sept. 18, but it wasn't enough in a 14-point region loss. (File)

By ANDREW SIMONSON | Special to the Reporter

With the offensive woes, Spain Park attempted a late comeback but couldn’t complete it in a 31-17 region loss to the Titans.

“Football’s a game of momentum,” Spain Park head coach Shawn Raney said postgame. “And when you don’t got it, and they got it, it’s just hard to find it, and you gotta make plays, and we didn’t.”

For most of the first quarter, neither team could find much to do on offense. It wasn’t until a Spain Park interception that was returned 54 yards that Gadsden City was able to set up inside the 5-yard line and punch it in for the game’s first score.

The Jaguars were held scoreless as Gadsden City added a passing touchdown off another Jaguars’ interception to end the half and a short field goal on the Titans’ first drive of the third quarter to give them a 17-point lead.

With just more than one minute to go in the third quarter, the Jaguars exploded for a 92-yard touchdown to cut the deficit to 10, which opened up a scoring blitz for both sides.

Titans’ running back CJ Miller followed with a rushing touchdown for a 24-7 lead, and then a receiving touchdown by Jaguars’ receiver David Moultry Jr. cut it down to 24-14.

A successful onside kick by Spain Park yielded a field goal, and suddenly, with six minutes to go and down just seven, Spain Park was one stop away from setting up a game-tying drive.

Unfortunately for the Jaguars, the Titans converted on third down in their own territory and marched down the field for a 14-play drive that included a 40-yard run by Latavius Hicks and Miller’s second score of the game to close out the 31-17 win.

“This is a very unusual team. I felt like we had a good week of practice, but we just got no momentum starting out. I thought our kids on defense fought, tried to keep us in it, and offensively we had no momentum with dropped balls and stuff,” Raney said.

Spain Park has a bye next week followed by a regional clash with 4-1 Oak Mountain, and coach Carter already plans to use the extra time to improve on this performance.