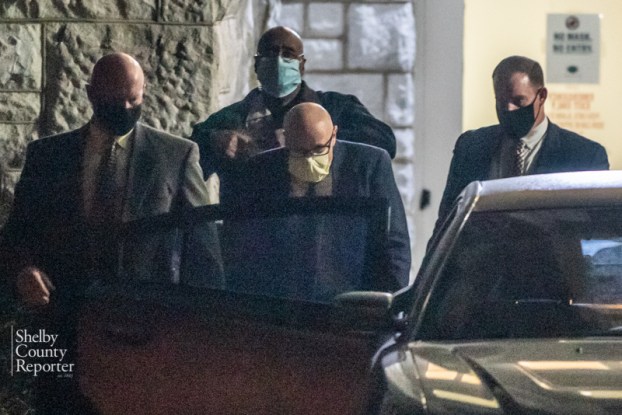 William Jeffrey "Jeff" West walks out of the Shelby County Courthouse on Nov. 20 after he was found guilty of manslaughter in the death of his wife, Kathleen Dawn "Kat" West, in 2018. (Reporter Photo/Keith McCoy)

The 12-person jury’s verdict came at about 9:50 p.m. after nearly five hours of deliberation on the fifth day of the trial of Jeff West, who was arrested in February 2018 and charged with his wife’s murder several weeks after her body was found outside of the couple’s home in Calera.

The lesser offense of manslaughter is a Class B felony with a potential punishment of up to 20 years in prison.

“Obviously, we’re disappointed with the manslaughter verdict,” Jeff West’s defense attorney John Robbins said. “We’re disappointed, but we have to respect the jurors’ decision, and we appreciate the effort they put in. It’s been a long day.”

Robbins said Jeff West was “stunned” and has maintained he did not kill his wife since day one.

“She’s upset,” Robbins said of Jeff and Kat West’s teenage daughter. “She lost her mother, and now she lost her father.”

Shelby County Assistant District Attorney Dan McBrayer said the prosecution was pleased to have brought justice in the case.

“Beyond that, while we continue to believe this was an intentional murder, we are pleased that he’s being brought to justice,” McBrayer said. “We worked hard and put in a lot of hours on this case. We presented the best case we could with the help of law enforcement, and thankfully we were successful.”

According to McBrayer, the prosecution brought forth the idea for the jury to consider the manslaughter charge because of the issue of voluntary intoxication in the case.

“We talked about it and thought that was appropriate, that the jury might reasonably see that and think that was an issue in the case,” he said.

Regarding Jeff West’s sentencing, McBrayer said his team will be asking for a prison term.

McBrayer addressed the prosecution’s decision on Nov. 20 to not cross examine Kat West’s mother, Nancy Martin, during her time on the witness stand.

“We chose not to take any cross examination there because that’s an incredibly difficult moment for her,” McBrayer said.

Judge Bill Bostick revoked Jeff West’s bond and said he will remain in the Shelby County Jail pending his sentencing hearing, which is scheduled for Monday, Jan. 11 at 1:30 p.m.