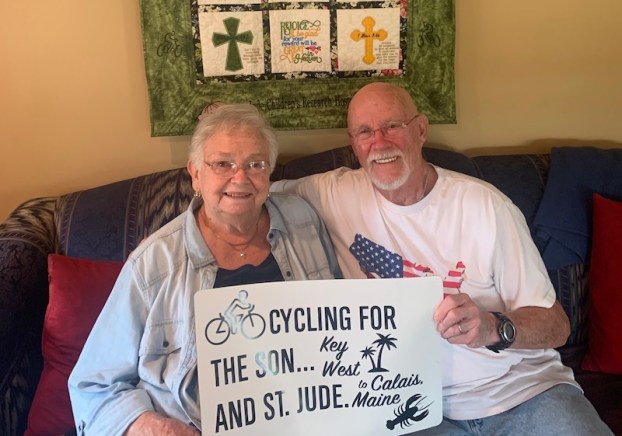 Starting over from canceled plans last year, George and Judy Dudley finally re-embark on the trip of a lifetime in late March as George Dudley begins his bicycling trip in Key West and ending it three months later in Calais, Maine. The quilt made to commemorate the trip is by Carolyn Sockwell (Contributed).

One year ago, George Dudley had big plans to spend a portion of his 80th year riding his bike from Key West to Maine for the children of St. Jude Hospital. With his wife Judy as his wing woman, setting up at camper sites along the way, they had planned to leave on their journey March 13 of 2020.

Two weeks before take-off, however,  a spot was discovered on Judy’s lungs that had to be looked into, and the trip was postponed out of concern but with plans to get up and running again as soon as Judy was. And then, on the original date of their plans, the entire country ended up shutting down, thwarting Dudley’s 80th birthday plans indefinitely.

“Under the circumstances, the whole thing turned out to be a huge blessing,” Dudley said.

Their plans would have had them on the road headed to the starting point in Key West when the shutdown happened if the spot had not been found the two weeks before.

“It really saved us some potential travel complications,” they said.

Dudley went on to have a lobectomy in April with plenty of time to rest and recover, not knowing when they’d be able to take up the trip again. The pandemic did not slow down their fundraising efforts, though. Even without the trip, the Dudleys still managed to raise $13,000 for St. Jude Hospital.

“I felt really good about that,” George Dudley said, “and as we regroup now, it allows us to still make plans to move forward again and this time just enjoy the journey as we do.”

Dudley has not let the pandemic slow down his training. He has continued to ride no less than ten miles a day, and in milder weather has averaged up to 50 miles a day, knowing that eventually, he’d get to reach this goal. With plans for their second dose of the vaccine in mid-March, they feel it’s finally time to set off and mark this trip off the bucket list. They plan to embark on the journey starting in Key West on March 26.

“The goal on the ride will be 50 miles a day, five days a week,” he said. His whole trip in fact is expected to take him 12 weeks, at 250 miles a week. When the Dudleys arrive at their destination in Maine, Dudley will have ridden his bike an estimated 3,000 miles.

As they stay with friends and at campgrounds along the way, they’ll then spend their weekends exploring and visiting friends and churches where they will have the chance to encourage people in their faith and speak to folks wherever their journey takes them.

George, a former pastor, said, “It’s an adventure. We don’t know what’s going to happen down the road and that’s the exciting part about the whole deal.”

With his guitar in the car and his sweetheart riding along via car and no other itinerary other than the journey, Dudley plans to take the experiences as they come. 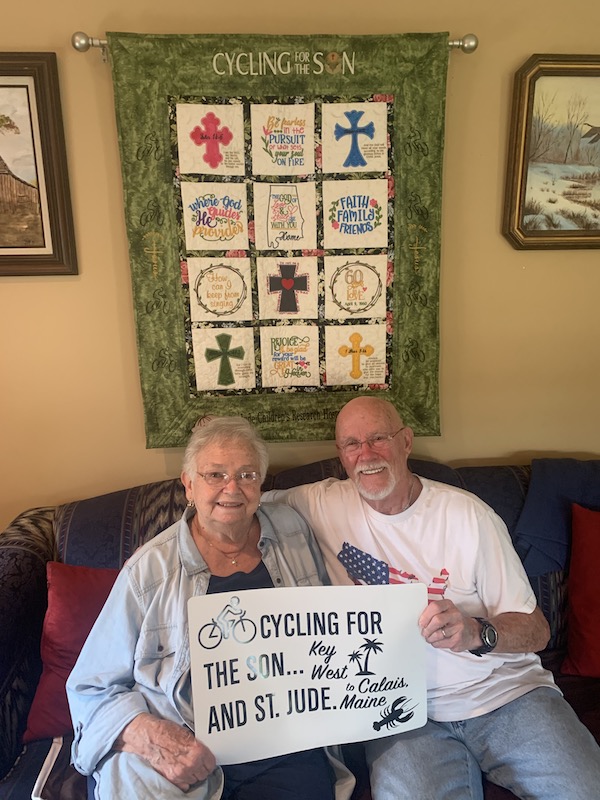