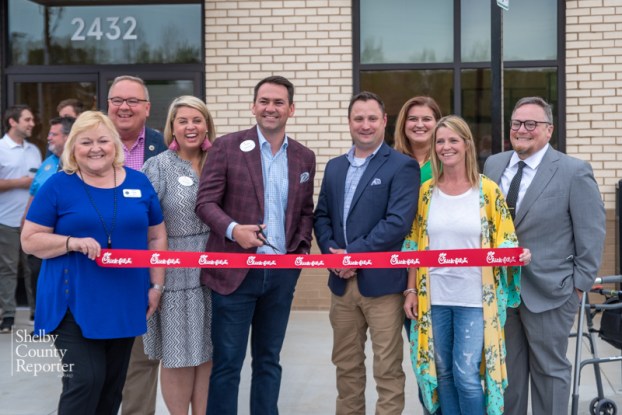 Chick-fil-A in Helena held a ribbon cutting ceremony on April 7, and officially opened its doors to the public on April 8. (Reporter Photo/Keith McCoy)

HELENA — After months of planning and construction, Chick-fil-A finally opened its doors to the public in Helena on April 8, after holding a ribbon cutting ceremony the day before.

“My family and I are excited to return to our hometown and serve our community with the opening of Chick-fil-A Helena,” said owner Brad Nichols. “Chick-fil-A has played an integral role in shaping me into the person I am today, and I look forward to extending that same positive

Nichols and his team have spent more than a year planning and getting ready to begin serving the Helena area, which he said that he has a deep admiration and respect for.

“I love Helena,” Nichols said. “I spent part of my time in college serving Helena and working for a company driving throughout this area. I have always had a respect for the city’s focus on education, first responders, police and other public services. I am excited for us to be a pivotal part of the community.”

Nichols has been working for the company for a significant part of his life, and wanted to be able to share his knowledge and experience of the food industry with the community. His father was a operator for the company when he was a child, and Nichols worked at the company on and off throughout his early adulthood.In 2012, Nichols was selected to become the operator of a Chick-fil-A location in Trussville, which eventually prepared him to open this restaurant in Helena.

Grand openings for the restaurants usually award the first guests at their store a free sandwich meal each week for a year. However, the corporation announced that the restaurant opted to award free meals to local heroes and to make monetary donations.

“In place of the traditional Chick-fil-A First 100 Grand Opening celebration, Chick-fil-A Helena will be surprising 100 local heroes making an impact in Helena with free Chick-fil-A for a year,” according to a press release. “Additionally, in honor of the new restaurant opening, Chick-fil-A will donate $25,000 to Feeding America. The funds will be distributed to partners within the greater Birmingham area to aid in the fight against hunger.”

The store opened its drive through and lobby on the morning of April 8. The lobby was designed with limited seating and social distancing in mind, and the drive-thru is open with a capacity of around 50 cars at a time.

“We are excited to be open today,” Nichols said. “We are thankful to be open and serve this community. Our team is working so diligently with our trainers, our grand opening supervisors and directors to make sure that you are served quickly.”