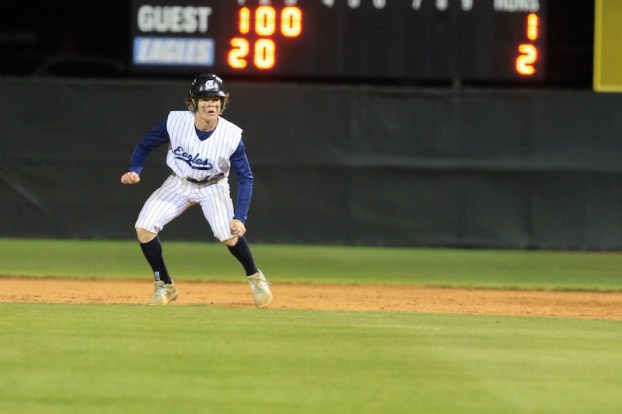 In a must-win situation, the Calera Eagles picked up a one-run win against Pelham on April 8 to end area play in a tie with Chilton County. (For the Reporter/Dawn Harrison)

PELHAM – With their playoff hopes riding on a win, the Calera Eagles found themselves in a difficult battle with county foe Pelham on Thursday, April 8.

In what was a pitchers’ duel for seven innings between Calera’s Preston Stokes and Pelham’s Zach Egan, turned into a sprint to the finish in extra innings.

Following seven scoreless innings, the game went to extras with Calera finally striking in the top of the eighth on an RBI single from Nick Bunn.

But after being held in check for the majority of the game, Chase Christian led off the bottom half of the inning with an inside-the-park home run down the left-field line to even the score again and force a ninth inning.

The Eagles, however, had gained confidence with two of their six hits through eight innings coming in the eighth.

Calera continued that late success with two more in the top of the ninth.

With one out, Parker Rodgers singled on a ground ball to put a runner aboard. Noah Clayton entered as a pinch runner for him and advanced to second on a wild pitch to put a runner in scoring position for Bentley Berry.

Berry capitalized and hit a hard ground ball up the middle to center field that brought Rodgers home for what became the game-winning run in a 2-1 victory to keep Calera’s playoff hopes alive.

Pelham came back in the bottom of the ninth and threatened with two batters reaching base safely, but Calera got out of the jam with a ground out to end the game.

Stokes got the start on the mound and went seven innings allowing one run on six hits with seven strikeouts.

He came out after giving up the inside-the-park home run in the top of the eighth, but put together a stellar outing to give his team a chance with seven scoreless innings.

Egan did the same for Pelham with seven scoreless innings that featured giving up four hits and no runs. He finished the night going through the eighth inning with three strikeouts, six hits allowed and one earned run.

Calera picked up four of its eight hits in the final two innings. Bunn and Berry had two hits and one RBI apiece, while Rodgers added two hits. Carter Sheehan and Riley Gay each had one hit in the win.

Pelham was led by one hit each from Josh Calvert, Christian Pritchett, JD Wilkens, Logan Green, Hayden Jackson and Chase Christian with Christian adding the only RBI on his home run.