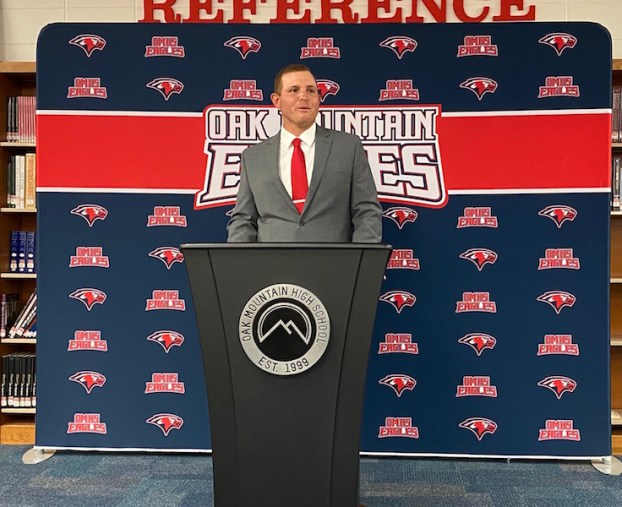 NORTH SHELBY – He couldn’t believe his ears at first. All of the hard work, the sleeping on floors of different field houses at his many coaching stops, the moving every couple of years; it finally paid off with one phone call from Oak Mountain High School Principal Dr. Kristi Sayers.

“Honestly, when Dr. Sayers offered me the job, I think I almost passed out,” Crane said. “I don’t really remember anything she said after that, I just kept thinking, I’ve got to call (my wife) Megan, I’ve got to call Megan.”

He did just that, and his wife was in just as much awe.

“I told her, ‘Hey, they offered me the job.’ She said, ‘No they didn’t,’” Crane said of the unbelievable moment. “She was just so excited because we love the Birmingham area. Everything is falling into place and it’s just like a sign from God that ‘Hey, you’ve done what you’re supposed to do, here it is. Now, go do something with it.’”

Crane returns to Oak Mountain after several high school coaching jobs, including a two-year stint with the Eagles from 2016-2018 as an assistant under Bell.

He most recently served as an assistant under Patrick Nix at Central-Phenix City, where he helped the Red Devils reach the semifinals of the Class 7A playoffs.

Crane has coached at multiple stops since graduating from Jacksonville State, coaching multiple positions along the way, but he said each one was to bring him back to Oak Mountain.

“Every move was always a move up, and every move was to bring me back here. I really believe that,” he said. “You think a door is closed and that part of your life is gone, and then God just circles you right back around. I couldn’t be more thrilled to be here. I have worked my whole life for this moment. I did all of that for this moment. It’s a big deal to me. I take a lot of pride in what I do.”

Crane will take over for Bell, who went 47-49 at Oak Mountain to become the winningest coach in program history, leading the Eagles to some of their best seasons in school history.

He knows taking over for Bell, he won’t be able to replace him, but hopes to be himself and bring success.

“You can’t replace coach Bell, and I’m not going to try to,” Crane said. “I’m going to try to be Tyler Crane. At the end of the day, if you believe in what you do, you’ll be successful.”

Crane also knows the difficult job ahead, competing in arguably the state’s toughest region with back-to-back state champion Thompson, powerhouse Hoover and other contenders such as Spain Park and Vestavia Hills.

“If you’re a competitor, you want to go right now and go with the big boys, and there aren’t many big boys out there that aren’t right here,” he said. “I have the utmost respect for every one of the coaches in this region. If I can obtain an ounce of the success they have obtained, I’ll consider my career really good. There are some amazing coaches in this region, and not just head coaches. That’s what it will take here to be successful too. It’s not just me, it’s all of us.”

Crane said he isn’t sure what the identity of the team will be after spending the last several seasons with an option-style attack, but he wants to evaluate the team and see what works best for them.

Coming off one of their best seasons in school history, including a second-round playoff spot, he knows the talent is there, especially with the return of fourth-year starting quarterback Evan Smith.

Most importantly, though, he wants to turn the program into what it is capable of because of his love for the community.

“I know how special this place is and what it can be. I know what kind of community we have,” Crane said. “My goal is to make this a state-championship program and grow these young men to be more than football players. I want them to be great human beings when they leave here.”