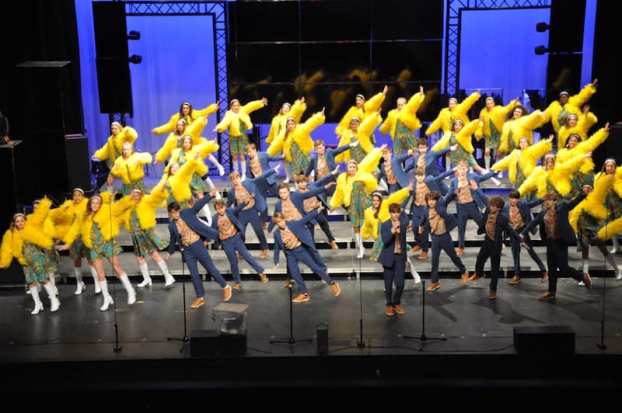 Oak Mountain Middle School’s Show Choir put together a special performance at the King of the Mountain competition April 9-10 despite not being able to rehearse together following the EF3 tornado two weeks earlier. (Contributed)

This year’s competition was hosted at Oak Mountain High School and featured 30 school choir groups from across the state.

“We felt it was a safe way to give those students the opportunity to perform. They have worked so hard, and it was an amazing experience that has meant the world to our students,” Hall said.

The middle school’s choir directors, Gia Graddy and Chanse Nelson, said that this was the group’s second performance in over a year. Before the event at home, Oak Mountain Middle School’s show choir was also named Grand Champion at the Auburn Show Choir Showdown on April 2.

Due to the Covid-19 pandemic, the group had been unable to perform during 2020, which Graddy said had been a sharp contrast to the group’s usual scheduled lineup of five concerts a year.

With the announcement of a second in-person concert, the students were excited to return to the stage. However, Graddy said the lead up to the competition had been filled with challenges.

In early March, Graddy was unable to lead the choir’s rehearsals for two weeks because she was diagnosed with coronavirus. Then, on March 25, Oak Mountain Middle School was struck by an EF3 tornado, which severely damaged the building. As a result, the school’s show choir group could not rehearse for the three weeks leading up to the competition.

Even with these restrictions, the students persisted and practiced virtually. Graddy uploaded several choreography videos for the students to study as well as recordings of each student’s vocal parts.

“The kids really haven’t been able to rehearse for a while. We have just been trying to do things virtually and are using contact technology so students could rehearse at home,” she said “So, it was a hard road this year, but it made the victory all that much sweeter.”

Graddy said 2020 was a challenging year for students in multiple ways, and that she wasn’t sure if her choir groups would even be able to perform this year either.

As a result, Graddy has focused class time on teaching her students to appreciate life’s journey just as much as its outcomes. Graddy even placed a banner in her classroom with the words “Joy in the Journey.”

“I always preach to my students when we talk about competitions that it is always nice to win or place, but what matters at the end of the day is that you did your best,” she said. “I have tried to get my students to focus on the process rather than just winning or losing. I just want them to focus on the joy that we have every day being together and doing what we love, which is singing and learning about music.”

Oak Mountain Middle School’s third concert, coined Eagle Extravaganza, is set for April 30 and will feature performances from Graddy’s three other choir groups in addition to the show choir.

The show will feature a variety of performances ranging from comedy acts to singing and dancing and even instrumentals.

This upcoming event will be the first time the school’s four choirs will perform together since the pandemic began. Tickets for the show became available on April 15 and can be found at Ommschoir.com.