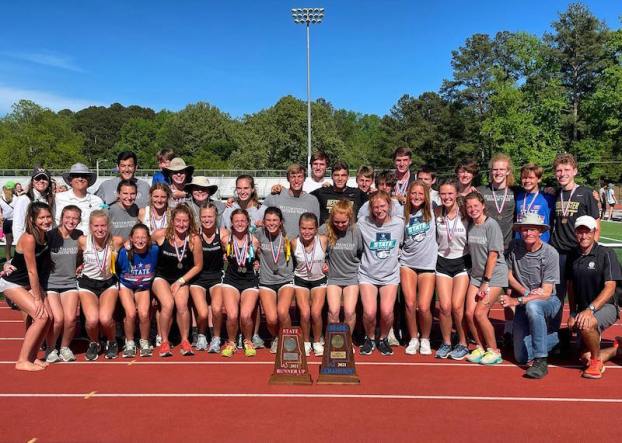 Westminster at Oak Mountain’s boys and girls outdoor track teams showcase their state championship and runner-up trophies after the boys won the Class 2A title and the girls finished second. (Contributed)

CULLMAN – The Westminster at Oak Mountain outdoor track and field teams continued their dominance in the sport at the AHSAA Class 2A State Meet in Cullman April 30-May 1 with the girls and boys both finishing inside the top two.

The boys won their third state championship in the last four seasons, while the girls finished runner-up to claim their fifth consecutive top-two finish.

“This year has been one of the most amazing years that we have ever had in the history of Track and Field at Westminster,” Westminster track and field head coach Dale Carrell said. “I am so proud of the team and its effort during the year.”

With last year not making it to the postseason, both teams made up for lost time with the performances, as the boys brought home another title after winning in 2018 and 2017.

“What a great weekend we had in Cullman. I watched tragedy turn into triumph, I saw boys grow into men, girls compete with grace, and I saw encouragement from all,” Carrell said. “Whether we win or lose, our focus in on the person of Jesus Christ, by the power of the Spirit, following the plan of the Father. For some, the path of God was difficult, for others the path was smoother, but all worked hard to accomplish their goal of glorifying the Lord.”

With last year not making it to the postseason, both teams made up for lost time with the performances, as the boys brought home another title after winning in 2018 and 2017.

This time around, they totaled 96 points to beat out rival Altamont, who finished second with 66 points.

The boys had nine podium finishers at the state meet with three of those winning state champions. Of those three state champions, two were individual athletes while the other was a relay team.

Andrew Purcell and Luke Eller were the two individual winners, while the 4X880-meter relay team won as well.

Eller won the high jump championship after clearing a height of 6 feet, 2 inches and also finished third in the triple jump with a distance of 40 feet, 11 inches.

David Haskins and Micah Adams were the other two boys’ athletes to finish on the podium.

The girls, who have now finished in the top four the last 10 years in a row with top-two finishes in each of the last five years, won the event back in 2019 and just missed out on doing so again this year.

The Knights totaled 113.50 points as a team, however, to claim their fifth consecutive finish inside the top two.

The girls ended the event with 10 podium finishers, including three individual winners and one team winner.

Six of the podium finishes came from two athletes, as Hallie Porterfield and Hannah Adams finished first and second in three different events.

Reave Metcalf added the final podium finish in the 400-meter dash, taking home second with a time of 1:01.46 to complete an impressive meet for the Knights.