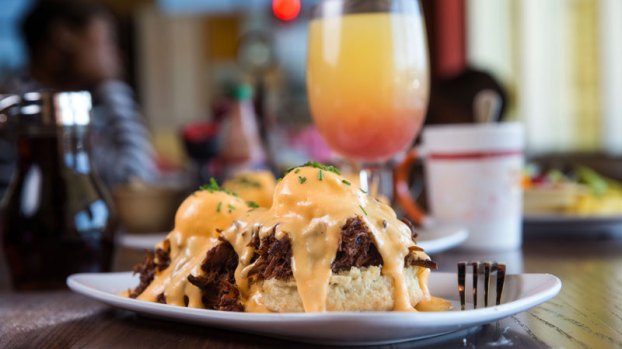 Ruby Sunshine, which is operated by the Ruby Slipper Restaurant Group, is opening in the old IHOP location in Brook Highland Plaza later this year. (Contributed)

By William Marlow | Special to the Reporter

The latest concept from Ruby Slipper Restaurant Group, the collective behind the acclaimed New Orleans-based eatery The Ruby Slipper Café, Ruby Sunshine in Birmingham is part of a larger expansion across the Southeast region, which includes locations in Alabama, Tennessee and North Carolina.

The Ruby Slipper Cafe was founded in 2008 by Jennifer and Erich Weishaupt and was inspired by the powerful sense of homecoming they felt after returning to New Orleans post-Hurricane Katrina.

Peter Gaudreau, CEO of Ruby Slipper Restaurant Group, said the company now wants to bring that hometown-spirit to Shelby County, and that following the positive reception the company’s Homewood store location received two years ago, expansion was only natural.

“Since opening our first location in the Homewood neighborhood of Birmingham in August 2019 we’ve felt so welcome and supported by the community especially during the pandemic,” Gaudreau said. “Brook Highland is a natural next step for our expansion, and we think the neighborhood captures that sense of New Orleans hospitality that Ruby Sunshine is all about.”

This addition will be the second Ruby Sunshine in Birmingham and the fourth in the state of Alabama with The Ruby Slipper Café’s in downtown Mobile and Orange Beach.

Gaudreau said Ruby Sunshine will embrace the Brook Highland community by offering a vibrant and inviting atmosphere for the whole family.

The restaurant will feature indoor seating for approximately 140 guests in addition to an outdoor covered patio area for up to 36 more guests.

In addition to welcoming guests, the new Ruby Sunshine location will provide job opportunities to a local team in the areas of managers, bartenders, servers, bussers, cooks and dish techs.

Gaudreau said job openings will soon be listed on the Ruby Sunshine website as the store opening approaches.

The Brook Highland restaurant in Birmingham will mark the third Alabama restaurant and the eighth Ruby Sunshine location.

The restaurant will be located on U.S. 280 next to Lowes in the building which formerly housed IHOP.