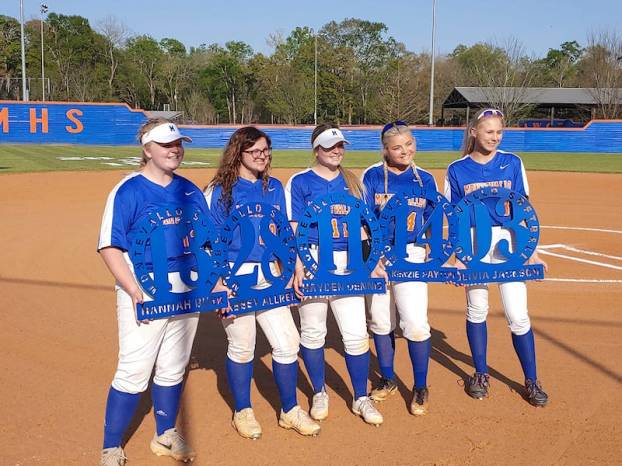 Montevallo’s five seniors, above, helped the Bulldogs finish on a strong note with a win at the regional tournament before the season came to an end. (Contributed)

TUSCALOOSA – The Montevallo softball team finished the regular season four games under .500, but that didn’t deter the Bulldogs from making a run in the postseason.

After beating West Blocton twice in the area tournament, the Bulldogs earned a spot in the West Regional tournament held at Tuscaloosa’s Bowers Park.

Although their season came to an end in the regional tournament with two losses, the Bulldogs did put together a win in the tournament, something the majority of teams in the state don’t get to accomplish.

Montevallo fell to No. 4 Northside in the opening round of the tournament by a final of 11-1, but with their season on the line, the Bulldogs responded in their second game at regionals.

Taking on Dora, Montevallo scored three runs in the first, one in the second, two in the third and seven in the fourth to pick up the mercy-rule win by a final score of 13-0 to keep their season alive for one more game.

In the win, the Bulldogs totaled 19 hits and gave up just on ehit to pick up the dominant win.

Anna Kate Johnson went 4-for-4 in the win and scored two runs to lead the Bulldogs, while Hayden Dennis, Allie Tryon and Tabetha Thomas all went 3-for-4. Dennis and Thomas both had triples, while Tryon and Thomas each had a home run.

Dennis also got the win in the circle, tossing a complete-game one-hit shutout with five strikeouts to help the Bulldogs pick up the regional win.

Montevallo went on to lose 8-2 to Gordo in its next must-win game to have the season come to an end, but got the opportunity to relish in a regional win.

Montevallo finished the season 14-20 overall with a regional appearance and runner-up finish in area play.