Prom is one of those experiences that tends to stand out in people’s memories, as they think back on their high school days.

For the juniors and seniors of Calera High, 2020 and 2021 were obviously unusual years that presented the challenges of not only a pandemic but also the everyday hurdles that come with high school life.

To most, a prom most likely seemed out of reach—but to a handful of dedicated parents, city leaders and others, it was an opportunity to help the students who had already lost so much get to experience something meaningful in the midst of it all. 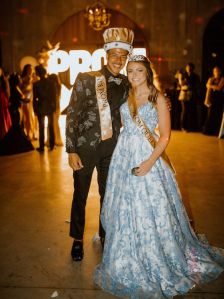 “Once we realized the schools were not going to be able to host any events like prom, I got together with some other moms and we started discussing what our options might be,” said parent Lori Douglass. “We knew this would be the only prom our girls, being seniors, would get to experience.”

Douglass’ daughter, Kendall, was one of those girls, and Douglass didn’t want her and the rest of the student body to miss out. After all, she and parents Tonya Jones and Michelle Smith had already worked together on other projects—helping to decorate hallways on homecoming week, for one. So when the idea of a junior-senior prom came along, they figured, why not?

“I wanted it for her, but I really wanted it for all the kids because as you grow older, prom is always one of those experiences you look back on from high school where memories are made,” said Douglass.

In March, the moms started calling venues trying to figure out where to hold the event. In April, when only about 60 tickets had been sold, they started to get a little nervous and decided to reach out to the Calera City Council and Mayor Jon Graham.

“It was a little scary at first,” Douglass said.

The Council ended up voting to donate $1,500 toward the cause. In the same meeting, an area developer representing Rausch-Coleman said his daughter was a senior last year and he realized how important prom was. Out of nowhere, he matched the city’s donation.

“When we heard that, we were really just floored. It definitely gave us room to breathe, and it really made the prom feel like more of a community event,” Douglass said.

The prom was held May 8 at Park Crest Event Facilities in Hoover. A total of 223 students attended, and the organizers were blown away with the ticket sales.

“Everything just came together. It was a lot of work but it was well worth it,” Douglass said, adding, “Nothing has been typical for this year’s senior class. We had homecoming but we didn’t get to have all the homecoming activities. We got to have athletics but we didn’t get to have pep rallies. We wanted to end the year with something special. Our focus this whole year was to make memories wherever we could.”

Calera graduate Kendall Douglass never dreamed that her own mom would be an organizer for her school’s prom—a fact she is thankful for.

“It meant a lot to us that they took time out of their lives to do that,” she said. “I am so grateful to her for her hard work.”

Graduate Desmond Brown added the event was “really fun, really nice. It was a nice venue and a great deejay.”

Calera Councilmember Philip Busby, a strong supporter of the cause, believed in what the parents were doing when they approached the city.

“These kids have had a hard couple of years dealing with all this stuff, and the teachers have too. They had a really nice event, and the kids had a really good time,” he said.