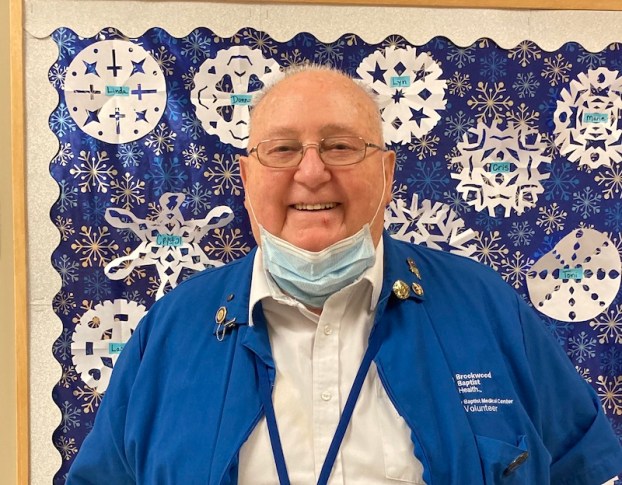 Larry Loyacano has volunteered for several interesting positions in his retirement. (Contributed)

“I enjoyed it very much, put two kids through college,” said the 76-year-old Louisiana native.

He retired in 2002. Loyacano soon discovered he “needed something to do” and became employed at the Birmingham Zoo where he operated the carousel and drove the train. His position included managing the youth volunteers.

In 2006, Loyacano became a volunteer at Shelby Medical Center (SMC) in Alabaster. Larry’s strong faith and conviction to serve his fellowman, guided him to SMC. He duties rotate depending upon the facility’s needs.

When he is not at his usual post, he provides coverage as a relief for other volunteers. Two days a week he is at his regular post and the other three days of the week he works relief as needed. As of March 2020, Larry incurred 14,000 volunteer hours.

“I enjoy meeting new people and talking to patients and family about the Lord. I got the opportunity to know the doctors and nurses. SCM has a fantastic staff.” said Loyacano.

Post pandemic, he is very excited to be able to resume his interactions with the patients and their families.

“I am able to calm patients. Listening to their concerns and sometimes praying with them. I have the satisfaction of knowing that I have helped people during a rough time in their life,” he added.

Loyacano’s custom of distributing a small cross to individuals he comes in contact with during his work has been long standing tradition. Each cross has a scripture inscribed on it.

Loyacano has been a member of Christ the King Lutheran Church since 1995. He held the position of Head Shepherd for 15 years. He is currently one of seven elders. He is dedicated to those he has been made responsible for.

Loyacano cherishes his role and relishes the opportunity to pray and stay connected to his congregants. He and his wife assist the pastor during funeral services where they set candles, and position notes on the lectern, etc.