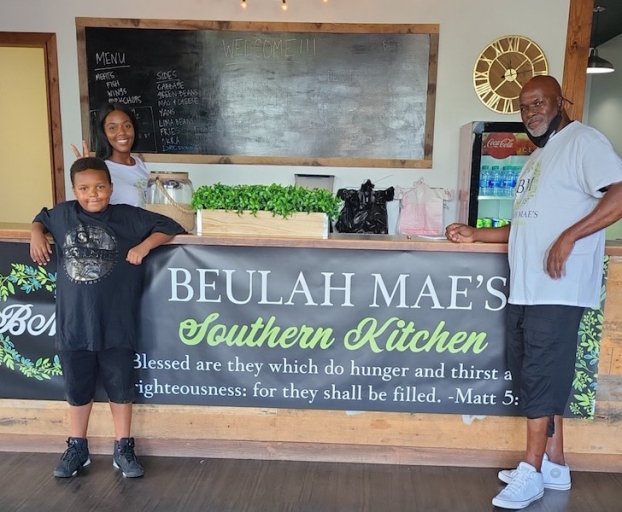 Beulah Mae's has opened a brick and mortar location in Alabaster after spending several years operating a food truck in the area. (Contributed)

The new storefront is located along First St. SW in the shopping center next to Little Caesars, and was debuted during June as part of the company’s two-year anniversary celebration.

First popularized in 2019 as a food truck, the eatery has since become a local staple for authentic Southern cuisine, with soul-food classics being the restaurant’s specialty. Popular menu items include fried catfish, pork chops, macaroni and cheese, collard greens and cornbread.

She added that becoming a restaurant owner was never her intention when founding the business. Rather, the service simply began as a tribute to their late grandmother, Beulah Mae, now the restaurant’s namesake.

“We weren’t actually looking to open a restaurant. The food we serve is what she cooked for us every Sunday. She always cooked a large dinner as if it were Thanksgiving,” Montgomery said. “That became a time when all our friends and family came together, and I just really wanted to share that experience.”

Montgomery enjoyed the experience so much growing up that she sought to expand the family tradition to the community. So, along with her two sisters Glena and Jaccolah, the family started serving their grandmother’s recipes out of a food truck.

The sisters initially cruised for customers at popular hangouts on weekends, such as Vegetable Patch in Alabaster. Over the years, however, they have expanded into catering and event hosting all over Shelby County.

With a restaurant now finally available, Montgomery said she feels the closest to embodying her grandmother’s memory yet.

“My grandmother was such a sweet person. Anybody could come to her house and get something to eat, and I am very excited that I can now give that experience to customers because it is not just about the food,” she said. “It is about them having a good experience.”

Montgomery said that the company’s food truck will remain in service in some capacity, and that the restaurant will just expand the company’s offerings due to new amenities, including additional friars and a full-fledged kitchen.

“We will always have our original menu items. Those are our staples. But now that we have a full kitchen, there will be a little bit more variation,” she said.

New menu items will include pot-roast, shepherd’s pie and baked chicken as well as desserts such as peach cobbler and banana pudding.

Regardless of the food she serves, Montgomery said she will always be committed to maintaining the family-oriented service that her grandmother fostered. Much of the restaurant’s current staff comprises Montgomery’s family as well as locals.

“We really wanted to keep it a family-business. Our grandmother really started all this, so having family members here means that they really understand what this is all about,” she said. “But we have also reached out to the community because this is something we believe they would like to be a part of as well.”

The restaurant is presently only operational on weekends, but Montgomery said she is hoping to extend the company’s hours to include weekdays as more staff undergo training.