County to have 29 local athletes to compete for… 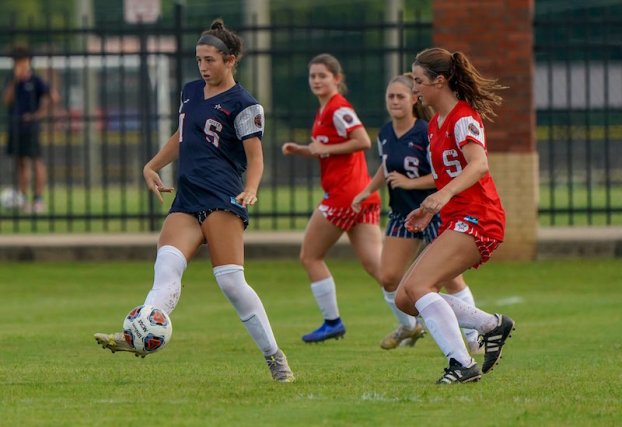 Oak Mountain's Haley Wells picked up an assist for the North team as one of nine local soccer players to help lead the boys and girls to a sweep during the All-Star event. (AHSAA Photo)

MONTGOMERY – There was no greater representation of local athletes than soccer stars during the All-Star Sports Week, and on Wednesday, July 21, they showcased their talent during the North-South All-Star game at the Montgomery Soccer Stadium.

With nine total players competing in the festivities between the boys and girls games, several were coming off historic seasons and joined forces to help lead the North All-Stars to wins of 6-1 and 3-0.

Both were one-sided matchups, but it was the girls who put together a dominant showing thanks in large part to Decatur’s Bonnie Frost, who won the MVP award for the game.

She scored four goals in the game, but one of those goals came thanks to an assist from a Pelham player.

After a 1-0 first half that saw Frost score on a penalty kick, the North came out ready to roll in the second half with two goals in the first 13 minutes to make it 3-0.

A few minutes later, Pelham’s Taylor Pilcher made her impact on the game when she picked up an assist when finding Frost, who buried her third goal of the game with 17:27 left.

Pilcher helped lead Pelham to its best season in school history this past season, and has now left her mark on an All-Star event.

Frost went on to score one more a minute later for a 5-0 lead before Leah Robinson put the South team on the board with a goal.

But Oak Mountain’s Haley Wells became one of the last to make a difference in the game when she picked up an assist on a pass to Claire Perkins who put a shot in the back of the net for the final score of 6-1.

Also competing in the girls game and playing valuable minutes on both ends of the field were Briarwood’s Savannah Sato, Chelsea’s Avery Burleson and Spain Park’s Sydney Soehn.

The group played a big role in helping the North have a strong first half, which made the difference.

They scored three goals in the opening period, two of which came in the final 10 minutes of the half.

Up 2-0, Jackson Webster became the local star to make the biggest difference when he scored the final goal of the game with 4:46 to play in the period.

That gave the North a 3-0 lead at the break, and in the second half, they used that cushion to their advantage and focused on the defensive end to complete the shutout win.